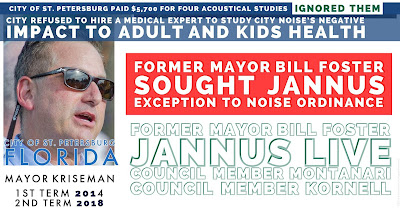 
Dave Goodwin and I would like to meet with you to discuss the proposed Noise Ordinance. At this meeting we are interested in receiving your feedback regarding our findings and proposals before we conduct our final stakeholder meeting in the Sunshine Center.

Since we last met with the representatives of Jannus Live we have conducted two additional noise studies, completed additional outreach and research, met with the Chamber of Commerce, and finalized ordinance concepts and language. We anticipate conducting a final informal noise study with the chamber on the 19th of January.

Ideally we would like to meet between the 22nd and 24th of January. Please let me know if these days work for you.

Foster replied,
Many thanks. We would love the opportunity to sit down to discuss the proposed noise ordinance.  Is there any way we can do this on January 10, 11 or 12?  Please let me know.

I believe that the study has been completed, and we will be happy to share the results before the PS&I meeting. I would also like to obtain a copy of the final report (sound study, backup material to be provided to Council, etc.) prior to the meeting.

Is there any chance we can sit down prior to the PS&I presentation to discuss the specifics of a Jannus exception?

I am not concerned with Beach Drive, The Edge, Vinoy Park, etc., but I do believe that consideration for Jannus is warranted, and a final meeting would be appreciated. Please let us know your availability.

City replies, "We would be happy to sit down and discuss your noise study and the specifics of the variance process." The City responded to my Public Records Request for documents relating to the meeting and the exception, "We have reviewed the files and can not find any documents or notes related to this."

According to Public Records Request, City and Jannus meet. While there are no documents, there may have been a discussion and the City may have not taken any notes.

Had this meeting been shared, residents would have attended and made notes or recorded the meeting. Thus, there is no record of the discussion in the meeting located at Municipal Service Center building, 8th Floor, Bayview Conference Room. Attendees were Bill Foster, Dave Goodwin, Jeff Knight, Ana Cruz, Luis Teba and Derrill McAteer, Assistant City Attorney.

Public Services & Infrastructure is a City Council committee responsibility for the noise ordinance revision recommendation to City Council. The meeting is a closed meeting. The public is not allowed to speak. CM Montanari provided former Foster special consideration and CM Kornell seconded the motion. No resident or organization was offered special consideration until there were requests after the former Mayor Foster presented.


(a) Chair Kornell seconded the motion for former Mayor Bill Foster to speak Foster stated that he is representing the Jannus Block. Council Member Kornell allotted 36 seconds introducing former Mayor Foster for his presentation to Council. Then Chair Kornell followed with 57 seconds on an impassioned speech for the music industry.


(b) According the meeting minutes, "Bill Foster spoke on behalf of his client, Jannus Live, and the impact that a decibel based system could have on the venue. Mr. Foster spoke in support of the current noise ordinance, which is the plainly audible system. Mr. Foster also stated that the main concern for his client is that a new noise ordinance could affect the venue's ability to host musical acts."


I don’t know Mr. Foster. We certainly were not “working closely” together on anything, including the noise issue. ~ Derrill McAteer, Assistant City Attorney

per an email to Ms. Hibbard,"


In response to the May 2, 2018 public records request, I received no documents at either of the two stakeholder meetings I attended with representatives of Jannus Live. Staff sent out the attached materials via the email below in preparation for the January meeting, and I was copied, but I received no documents from Jannus Live representatives prior to or during the meetings. Luis Teba sent me a copy of Jannus Live’s subsequent noise study which I will provide. However, everything attached (and anything else staff sent to or received from Mr. Foster, including Jannus Live’s noise study provided after the second meeting) should be included in staff’s response to the public records request.  Dave Goodwin and Luis Teba dealt with stakeholders and residents directly regarding noise, not City Legal.
Again I must reiterate I have never corresponded with or spoken to Mr. Foster outside the confines of the two Jannus Live stakeholder meetings, and in those meetings I kept my comments to a minimum and took no notes. The meetings took place on January 11, 2018 and February 20, 2018 in the Municipal Service Center building, 8th Floor, Bayview Conference Room. Attendees were Bill Foster, Dave Goodwin, Jeff Knight, Ana Cruz, Luis Teba and me.

I asked, during the second meeting, that the Jannus Representatives share their noise study results and noise mitigation plans with City staff. I will pass the study on in response to this request.

I don’t know Mr. Foster. We certainly were not “working closely” together on anything, including the noise issue.

(e) At 11:44 A.M, which was after the PS&I meeting ended, according to a Public Records Request, Foster texted Kornell, "No apology necessary. Thank you for allowing me to speak."

...For years now, over-amplified sound from restaurants, parks, concerts and festivals have bombarded residents as far as a mile away from the source! The new ordinance, while better than the old, is still far from perfect, and the DRCA is working to get rid of its seriously troublesome loopholes. The initial effort to get the City to do something about noise pollution has kept us busy for three full years. No other group assisted us, because other neighborhood associations don’t consider it to be their problem. But our persistence has paid off, and we will continue to persist until we rid the new ordinance of its faults.

I emailed CM Kornell, "As you are both Chair of the Public Services and Infrastructure Committee and my district representative, I request to speak for 8 minutes at the next PSI meeting on the noise issue..."

(a) PS&I Committee Chair Kornell did respond that other had requested to speak, because Mayor Foster was allowed to address April 20th's PS&I meeting for Jannus Live. Kornell mentioned downtown residents wanted to speak and would only allow one. Yet, Kornell did not mention that a resident, who did not live downtown, had emailed him and had requested to speak. Kornell only mentioned downtown residents.

The City has continually focused on the downtown noise issue and not admitted and or knew there was a noise issue outside downtown.

Kornell failed to mentioned that I had made a request to speak. Why had PS&I Committee Chair Kornell allowed former Mayor Ulrich to speak for Downtown Residents Civic Association and no one outside downtown?

(b) I had conducted data analysis and trend analysis on the City noise calls, and associated crime and presented the finding to City Council. Public Records Requests and subsequent analysis showed there were no citations issued for noise. However, the Police provided the incorrect data to one of my Public Records Requests. Later, Police Chief Holloway addressed the Chamber of Commerce in a meeting, stating there were citations. 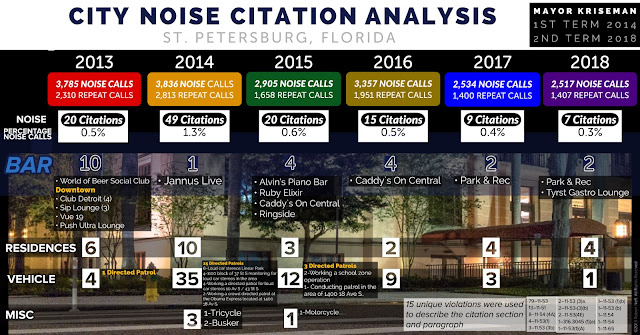 In May 2014, Council Member Kornell had worked with Flamingo Owner and Skyway Marina Board President Jack Dougherty, and Community Service Officer Kelly to develop a strategy to deal with a resident who complained about the noise. I am that constituent and resident, see the email is in the article.

My requests to City Council in Open Forum and email for the strategy have produced no response. On March 18, 2016, Flamingo Resort had filed a lawsuit against me.

From August 2009 to 2018, residents made 208 noise-related calls to Emergency Communications Division’s police operators to report noise at the Flamingo Resort and 1058 crime and non-crime calls. Police did not issue one noise citation but made 62 arrests for crime-related calls from 2009-2018. For example, Calls For Service Report 2018137698, the notes state,

HAD A MALE CALLER ON THE LINE WHO ADVS THERE WAS A FEMALE WHO WAS INVOLVED IN HUMAN TRAFFICKING D/C LINE BEFORE NC COULD TRANSFER.

Residents stated approximately 42 times the music was either turned down before officer arrived, had just stopped, or was back up after the officer left. Residents reported hearing the music 1, 4 and 5 blocks away.  Some residents reported windows shaking. Bass and thumping were a common theme.

(a) City as yet to respond with the date for this message from Foster to Goodwin, "Thanks for the invite. I will be there to speak." The unanswered question is, Who invited question Foster to speak, Goodwin or Council Member Montanari?

(b) PS&I abandons consideration for the decibel standard, which would hold the bars more accountable for noise at any time and distance.

Why was not I allowed to speak?

You need to ask CM Kornell, Chair PS&I committee. He never responded to my request to speak to the citywide noise issues at the PS&I meeting. I had also asked for time to speak at a City Council Meeting, not the Council's Open Forum. There was no response.

Other examples of the City's lack of transparency in the noise revision process.

Residents who signed up for updates on the Noise Ordinance Revision activities were not notified how many business stakeholder meetings there were, when and who attended, or the outcome. In City's presentations to the PS&I the business stakeholders meeting's times, dates, attendees, and locations are not listed. The City did not maintain a list of documents on the web site, nor were residents advised past documents existed.

For example, on November 8, 2016, City made a request for two documents that were presented at 2016 Florida Chapter of the American Planning Association annual conference:

I have extensively covered the noise issue and used research and Public Records Requests. 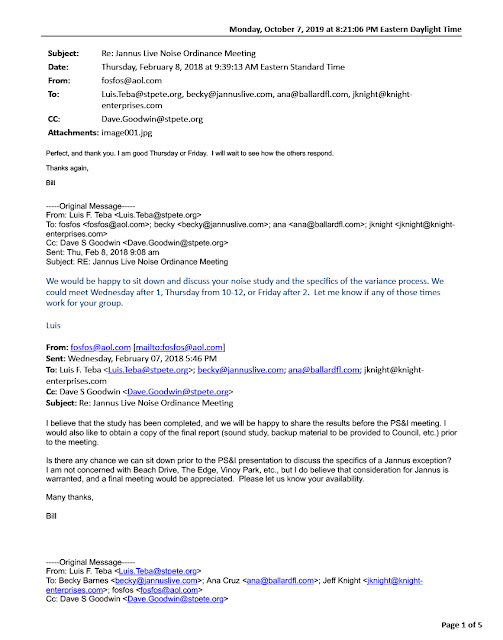 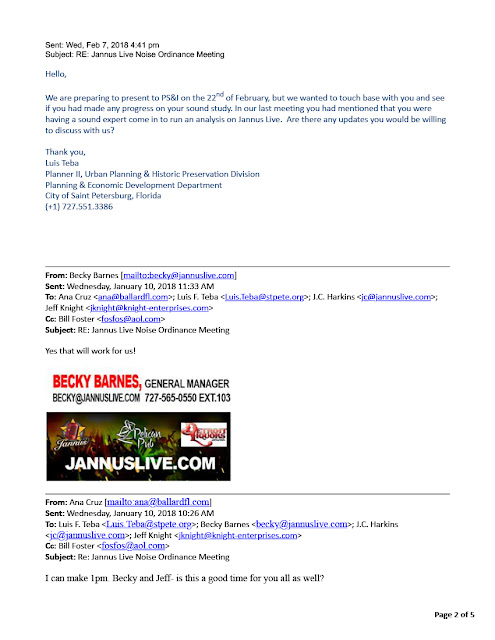 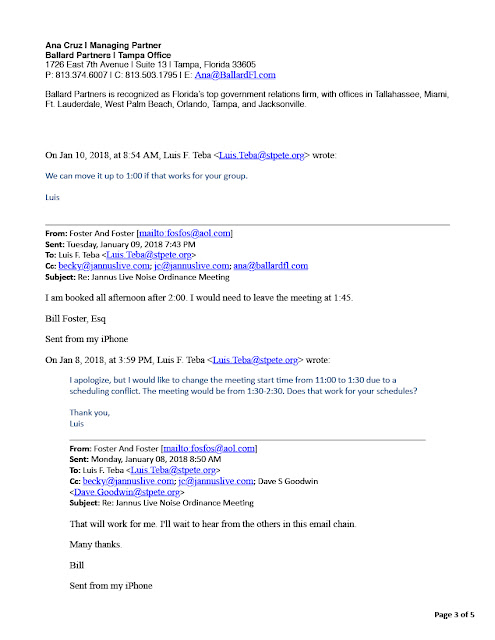 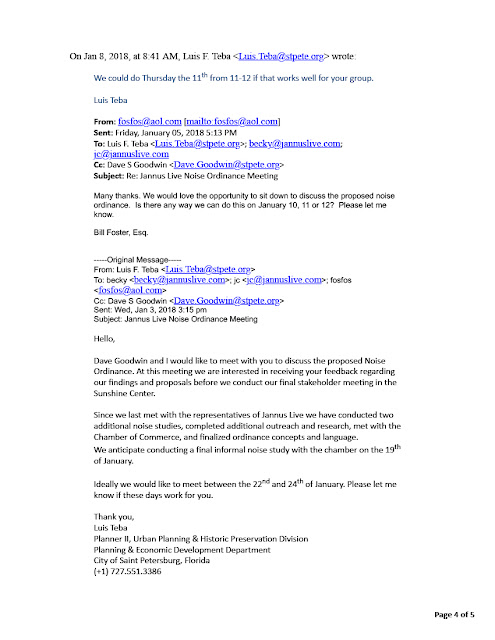 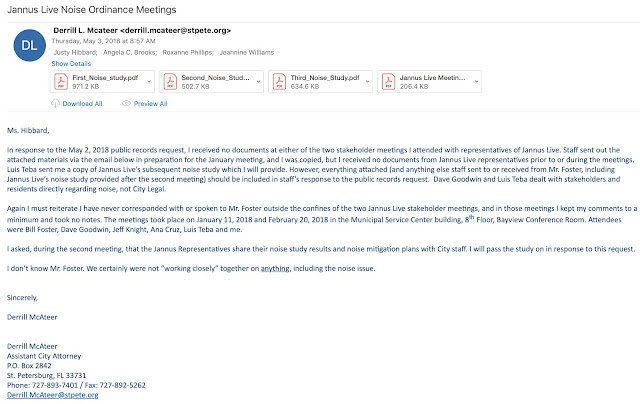