St. Petersburg Police is GASLIGHTING residents on the noise issue, while supporting bars

What can you do to ensure City Council changes the Noise Ordinance?

The following summary is just one example of how the St. Petersburg Police is gaslighting residents on the noise issue, while supporting bars.  Residents are poorly served by our bureaucrats and Law Enforcement Officers. Bar owners and supporters contribute to gaslighting the residents by telling them to move and bullying them on social media sources, such as, Facebook and NextDoor.  "

Mayor Kriseman and Police Chief Holloway are gaslighting residences who call to report noise at a bar, business or a residence. Instead of enforcing the noise ordinance, the Police blame the resident. Frustrated, many residents have stopped calling the police. Mayor Kriseman is on record supporting the police.

How can the current noise ordinance be misunderstood? The City, City Council, and police believe the noise issue is about plainly audible and what an officer can hear. However, the plainly audible includes in the definition as, "Words or phrases need not be discernible and low frequency sound reverberations are included." 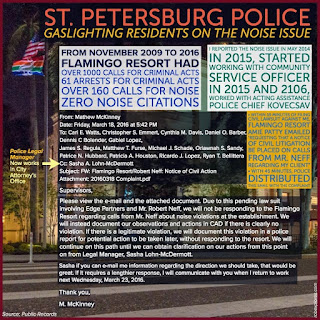 Low frequency waves are addressed in the City Code, see Sec. 11-47. - Definitions. Plainly audible means any sound produced by a source, which can be heard by any reasonable person of ordinary sensibilities using his or her unaided hearing faculties. Measurement standards shall be the auditory senses. Words or phrases need not be discernible and low frequency sound reverberations are included. 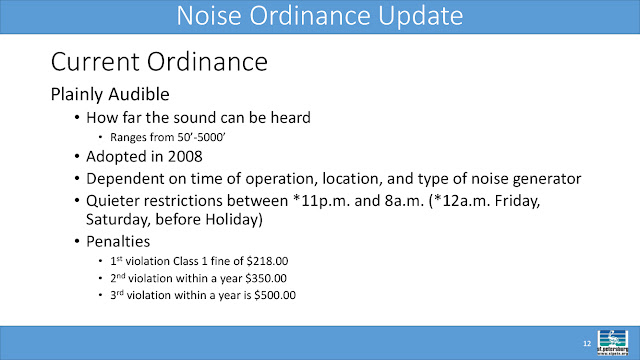 If the officers can hear or feel the thumping inside your residence, this falls under the noise ordinance's low frequency reverberations. On multiple occasions, responding officers have treated bass or thumping the same as audible music. 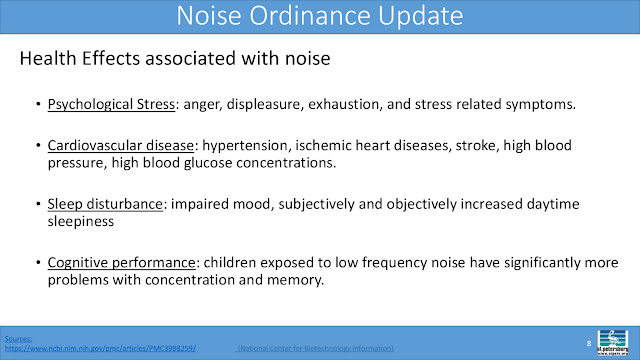 The police officers, who have responded to my noise calls, cannot hear the low frequency reverberations. Yet, other people present can hear it, and several have been senior citizens. If police are there for 5 minutes, the low frequency or the words or phrases that are not discernible may not bother them. But, as a resident, you have to put up with the thumping for 2 to 6+ hours. The thumping will interfere with television, conversation, dinner and sleep. The low frequency reverberations impact your health, which may cause stress, anxiety, and your blood pressure to increase.

When I have called the police to report noise at the Flamingo Resort in the Skyway Marina District, the officers stated that my residence must exceed a certain distance for the noise ordinance to apply. Police have used a laser to measure the distance and I am over 1000'.

I also discovered an email, dated December 15, 2015, from Police Legal that defines which noise ordinance paragraph applies for the Flamingo Resort. Officer Kelly was asked to provide this to the Flamingo Management. I was not copied or notified, even though I had been working with the then Acting Assistant Police Chief, Major Kovacsev.

Hi Officer Kelly, I met with Lt. Watts this afternoon re: noise complaints at the Flamingo. Attached please find Section 11-53 of the St. Petersburg City Code to provide to management at the Flamingo. Subsection (4)(b), dealing with privately-owned outdoor places, is the applicable portion of the ordinance. I’ve discussed the ordinance with Lt. Watts. If you have any questions about it. please give me a call. I’ve also attached Section 11-53, which deals with the penalties for a violation of Section 11-53.”

The noise ordinance subsection states 1000'. The Police have measured the distance with laser, and the distance from the Flamingo Resort to my condo is greater than 1000'.

I had attempted to give this letter to several officers, but they refused to accept the letter. One officer stated the noise ordinance paragraph that applied that was over 3000' Another officer stated he would check with legal and get back to me. He never did.

Both Officer's behavior and comment were witnessed by a resident who had heard the noise.
I am not the only person in the area who has called.

The responding officers have never mentioned "low frequency reverberations" to me nor discussed this in the Call For Service Reports. The officers only seem to be concerned if the noise is plainly audible and if the distance meets the criteria. But the different Police Officers cannot get their stories straight.

When the police respond, the officers commonly state, I can't hear it. What exactly does "hear" mean to them. Is it the same as listening to the radio station in their car? According to the noise ordinance, they do not need to understand the lyrics. They need not be discernible.

Officers have told me if a citation is issued, they would be required to defend the citation in court. So they want to make sure they hear it. One officer told me the City will not cite a business because the City doesn't want it to go out of business.

Residents have called dispatch and complained about the thumping inside their condo, or the walls are vibrating. Police have experienced this yet do not issue a citation. Instead, the police respond and issue warnings or ask the manager to turn down the music. This has been going on downtown and in the Skyway Marina District at the Flamingo Resort for years.

The bars only understand one thing, a citation with a fine. Until then, they will continue to crank the music and disregard our quality of life.

The City has presented City Council with three options in the Public Services and Infrastructure Committee. 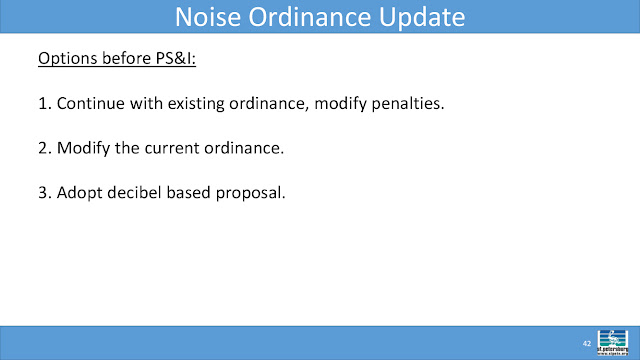 Options 1 and 2 use the same noise ordinance with modifications. These options keep plainly audible, but this does nothing to change the status quo. This helps the bars, not residents whose quality of life has diminished! Instead of the police enforcing the noise ordinance and issuing citations, the trends seem to be asking the bar, business or residence to turn down the music.

The problem with this approach is there are repeat calls and the request to turn down the noise becomes meaningless, because there is no solution. The music may be turned up after the police leave or turned up the next time. There are more repeat calls than one time calls to a bar, business, or residence in the City. These repeat responses cost taxpayers' dollars.


If Mayor Kriseman and Police Chief Holloway had only identified the issue with the noise ordinance and sought to change the ordinance, the city could have save taxpayer dollars, repositioned resources and not targeted residents.

Both Mayor Kriseman and Police Chief Holloway have not been proactive, which has allowed their officers to target repeat noise callers.

When you call the Police to report noise, Police Dispatch may or may not tell you that you need to be seen by an officer in order for the bar or residence to be cited for noise. If you do not want to leave your name, you may be resident refused. Dispatch may also interpret the noise ordinance without knowing how far away you are from the noise. While I am over 1000’, dispatch told me, the noise ordinance does not apply to 11 PM. This is incorrect. Dispatch is making decisions that are not for them to make.

Option 3 requires noise to be measured with a decibel meter and sets a standard. The decibel standard can measure audible and low frequency noise. This removes plainly audible. Decibels are the best method to ensure residents have a quality of life.


What can you do to ensure City Council changes the Noise Ordinance?

Call or email the Mayor Kriseman and your Council Member and tell them, Choose Option 3, We want decibels measured, and say no to 85 dB!

Mr. Foster said the current plainly audible noise ordinance is working, and there is no need to go to a decibel standard. However, Mr. Foster failed to disclose the Jannus Live owner and Mr. Foster do not live downtown. They do not have to live with the noise and thumping inside their home for 2-6+ hours, whenever the bars decide to crank the music! 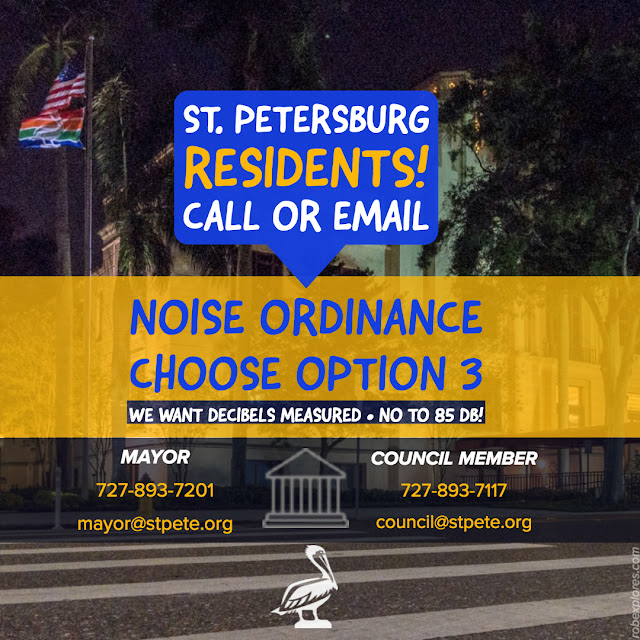 While St. Petersburg may want to be the next live music venue and boost tourism, residents need to let the City of St. Petersburg know that the noise issue isn't just about downtown, but the entire city. Austin overtook Denver as #1 Live Music City and noise calls increased 3x to over 15,000 calls per year!

St. Pete needs a city vibe for all residents! 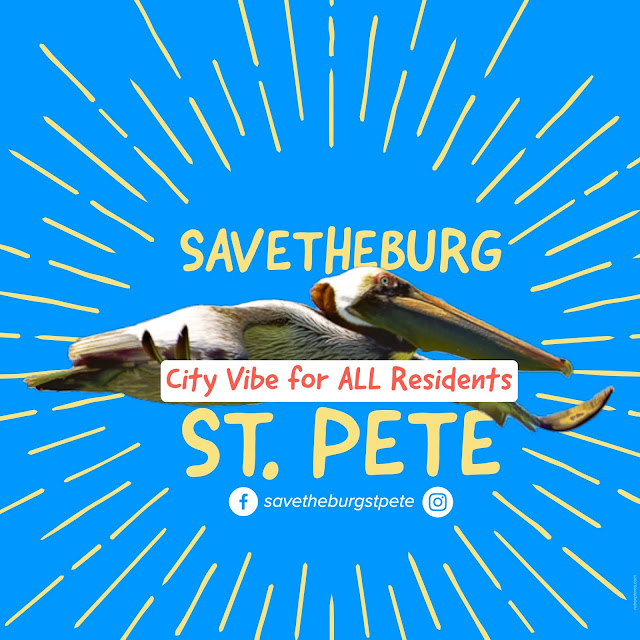