St. Petersburg's noise issue is not just in downtown, it's citywide

An analysis of the addresses with more than six (6) repeat calls reveals there were a total of 59 addresses that account for 650 calls.

While the City has access to the same Police call logs, there appears to not have been any effort to understand nor investigate the noise issue outside of the downtown bar scene. This was due to resident complaints.


My review of the data found the address could be separated into four categories:

Addresses with More Than 6 or More Repeat Calls

An analysis of the addresses with more than six (6) repeat calls reveals there were a total of 59 addresses that account for 650 calls.
The data provided in a public record request from the St. Petersburg Police Department does not identify the categories. Hence, I initially focused on the "Top 30" repeat offenders. Then expanded to addresses with 6 or more repeat calls.

According to the data, residents are impacted by bars, restaurants, clubs, entertainment complexes, car boom boxes and other residences. The City and Police failed to identify that there were 27,638 calls for noise and zero citations to businesses and residences from 2009-2016. The conclusion is, St. Petersburg’s noise ordinance is ineffective.

The data analysis of the 2015 and 2016 noise calls logs focused on four areas.

The City has not identified the types of noise offenders nor where they are located. 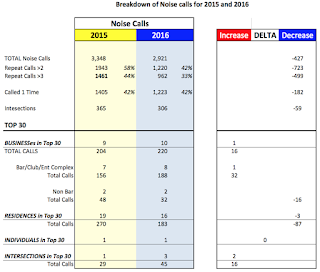 Reducing repeat calls will reduce the noise call volume. This can be accomplished through education and issuing citations. 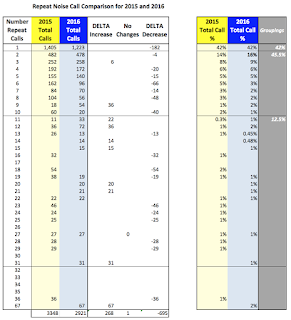 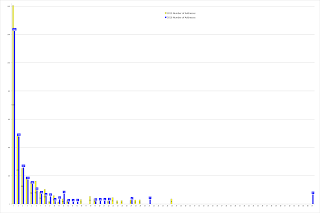 Note: The time of day was not analyzed. Police did not provide the incident time in the call timestamp.

While the overall number of calls decreased by 427 in 2016, the noise calls to bars, clubs and entertainment complexes, and intersections increased, however...

A data model will identify where the noise issues and who are the repeat offenders and action taken. The model would include a heat map to identify the hot spots. While downtown bars have been the focus when, citywide, the data shows there are repeat offenders at both businesses and residences. The data model should incorporate:

† Intersections are the least understood and warrant further investigation. Intersections, for example, 13TH AV S / DR MARTIN LUTHER KING JR ST S, are easily identifiable by the two streets separated by the forward slash. Understanding this data, requires a review of the Call For Service reports and call audio. This will identify how the call was generated, by officers or residents. The Call For Service Report requires the nature, time of day and day of the week, and location. This was outside the data analysis' scope. Unless the city provides the data for free, this analysis would incur significant cost.


Should you have a noise-related story to share or have a question, contact me directly via email.

Public input is being sought on the Noise Ordinance. You may express your concerns and thoughts by emailing the Mayor at mayor@stpete.org and your council member, council@stpete.org.