What You Should Tell Your Kids About Electric Vehicles 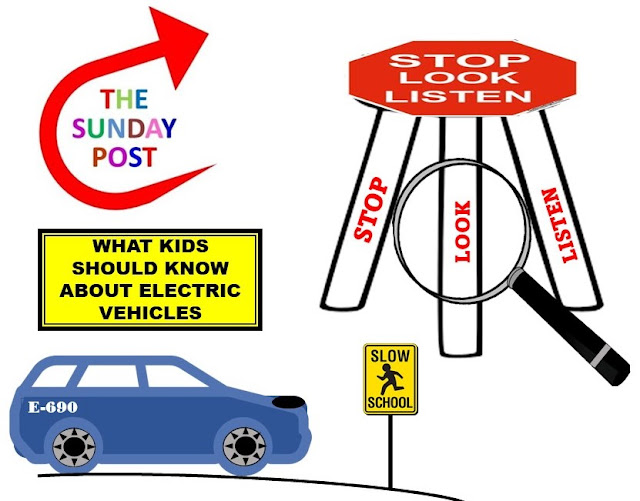 This is the third Post in my series regarding the rapidly emerging electric vehicle.

You can catch the first two post by clicking on these links:

Things You Need to Know About Driving Around With Electric Vehicles

All indications are the number of electric cars and trucks on our streets and roads is going to increase at a dramatic rate over the next three to five years.

As I've indicated in my previous posts, this new form of transportation is going to affect us in many ways in addition to our move away from fossil fuels.

I've taken a look at bikers, bicycles, and pedestrians in these previous posts and how the presence of electric vehicles in on our roadways, and in our parking lots is likely to affect us.

However, the impact on children may be the most significant.

Children today from somewhere between five and seven on up are aware of cars, kind of how they work, how they look, and most of all how they sound.

The old-school safety adage at the intersection “Stop Look And Listen” has probably saved more children's lives, then we can begin to imagine. The problem is the third leg of that three-legged Stool Stop, look, Listen is not going to work as well as it used to.

Children being born now, under the age of 5, will grow up riding in and being around electrically powered vehicles. It's not too big of a stretch to assume that they will adapt to their new environment of something large and dangerous moving about them that they can't hear, better than their older counterparts who rely significantly on their ability to hear something coming as well as see it coming.

Note the teenager or preteen, and the young adult, walking across the intersection cell phone in hand texting, reading text or making a call and not bothering to look either way relying mostly on their ears to alert them if something is headed in their direction.

In the world of electric vehicles, unless there are some significant changes, that is a recipe for disaster.

Younger children, who tend to learn by example are following along with less visual attention to almost everything and more audible attention than ever.

So, the question is what do you tell your children about electric vehicles? I think it first begins with an example of you yourself changing your level of awareness in walking, bike riding and maneuvering in parking lots. Leave your cell phone in your pocket, be constantly looking about, and when you see an electric vehicle point it out to your child and comment about how quiet it is.

Raising the awareness level among children and young adults as it relates to sensory perception is going to be a significant challenge. Most of us will go to almost any length to protect our children from harm; the question is how much effort will we put into training them in a new way of walking and riding their bicycles?

New coloring books that point out you have to look for the cars not just listen for them.

All of this needs to start now, not after we've had a ration of pedestrian injuries and deaths of children and adults related to electrically powered vehicles.

It may be time to start comparing that electric car as a stealth predator, not unlike the neighborhood cat who quietly sneaks up on the neighborhood squirrel, who, if not paying close attention may have an unpleasant outcome.

None of this is to say that electric vehicles are inherently bad. They certainly are not.

They are going to contribute significantly toward resolving our climate-change issues and our consumption of fossil fuels.

However, all of us are going to have to adapt to the presence of these large, quiet machines on our streets, roadways, parking lots and school pickup zones. Now is the time to start not after tragedy occurs.