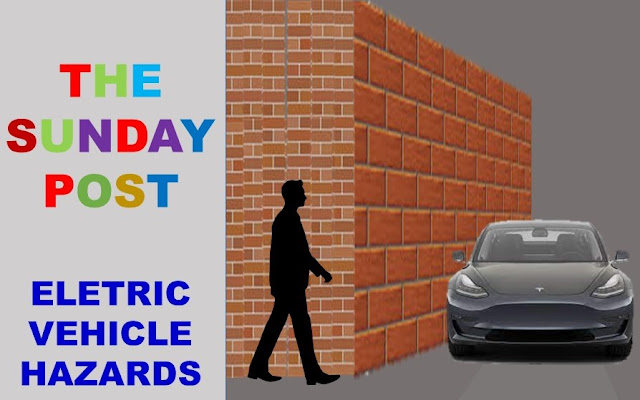 I almost got run over by a Tesla a week or so ago. It was not really my fault or the Tesla driver's fault it was the car's fault.

I had an early-morning appointment at my doctor's office, which is in a small building with an attached parking lot in the rear. I pulled in and parked in one of the available slots at the rear of the building walked up toward the back of the building and then started around the corner of the building to the front entrance.

As I stepped out of the corner which was into the driveway from the front entrance into the parking lot, I was nearly run down by a very large black Tesla. I'm not sure who was the most startled, me or the driver of the Tesla. The problem is he couldn't see me coming, and I could not hear him coming either.

One of the fascinating characteristics of electric vehicles, cars and trucks, is they are extremely quiet, even the best gas or diesel-powered automobile makes a slight sound when it's running.

Not so with the electric car. No sound, nothing. They make a little noise on the highway when they're up to speed from passing through the air but when moving slowly through a parking lot or down a city street, there's virtually no sound from the car.

So, it's easy for them to sneak up on you.

We are all going to have to change our transportation habits.

I put together a list of things you need to consider when you're a pedestrian crossing a street, walking through a parking lot, riding on one of those so-called bike paths that is carved out of streets with two simple little white lines, your whole level of awareness needs to increase.

Instead of walking along the parking lot, cell phone in hand, checking text messages you're much better advised to be in heads-up mode looking in both directions and glancing behind you all the time.

When you are walking around the corner of a building, or any structure, for that matter, and the turn leads you into a driveway or an alley, you need to stop before you walk around that corner and look around the corner to see if there's a car or a truck coming because if it's electric, you may not hear it.

All of this is really kind of a sea change for the way we function these days as we wonder somewhat aimlessly through parking lots, across streets, around corners, looking at our cell phone and listening with our ears to what might be oncoming traffic. That approach to life is not going to work anymore in the very near future.

I think bicyclists have an awful lot to worry about also.

I don't know about you, but when I ride my bicycle, I can often find myself drifting into a very comfortable place enjoying the ride, enjoying the scenery, looking for people to say hi to, looking for other bicyclists and just generally not paying a whole lot of attention to what's going on around me.

That approach to bicycling isn't going to work either.

Same problem. You just cannot hear that electric car coming up behind you. It's there before you know it, and if you suddenly turn into its path, the result is not going to work out well in your favor.

So, along with all of this comes a change in the way we are going to have to drive. Looking at the proposed sales figures of electric vehicles for the next five to seven years the number of these vehicles coming online and on the road is just going to be something a little short of staggering.

When there was just Tesla and a couple of other companies sort of fooling around in the electric car market it really wasn't much of a deal.

However, as these cars become more plentiful and with lower costs, they make excellent vehicles to take children to school, to go get groceries and run around town presenting a whole new series of hazards for us to look at.

But we are going to have to refine the way we ride, drive, work, and walk. So, if you're going to be out there walking your dog, riding your bike, taking your kid to school or just wandering through the parking lot at your favorite mall, keep your head up, your eyes open, and rely a little less on your ears as the way you keep from getting run over.