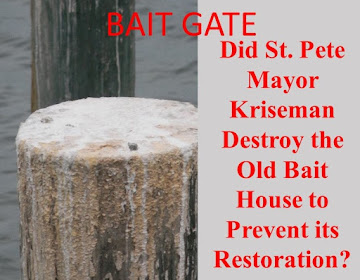 It all started out quite innocently.

Saint Pete City Council member Robert Blackman wanted to refurbish the historic bait shop that was part of the Saint Pete pier which they originally constructed for the 1926-million-dollar pier. 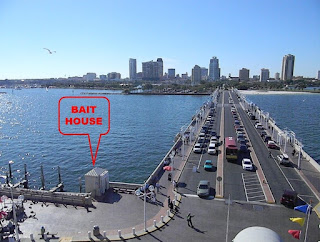 The old bait house was kind of a throwback to pier history.

Once mayor Kriseman and his inner circle discovered that the Councilman was serious about renovating the Bait House they sprang into action.

This isn't the first time that the mayor has taken a fairly aggressive action to get his way with his priceless waterfront and his special pier. Just for the record, let me recall for you in the following posts some of the actions that went on that led to the concrete box on the Bay and a park at or near sea level, which is destined to flood in the very near future if you listen to Kriseman's own climate-change rhetoric.

The New Pier a Project out of control

The good mayor invoked everything from the coronavirus to the city budget as an excuse for not wanting to do the restoration, but I think the real reason is poop. 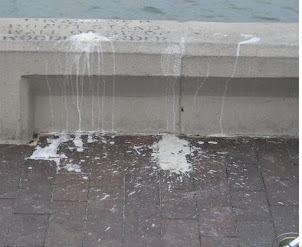 Kriseman holds his creation of the new Saint Pete pier as a holy mission. And I'm pretty sure the thought of an antique bait shop provisioned like the old one where the Pelicans walked around eating and pooping on the sidewalk is not exactly part of the mayor's concept. Some of the Pelicans took up almost permanent residence at the old bait shop. There are a lot of locals and winter visitors who came back to the pier and specifically the old bait house just to see their Pelican friends.

Just hard to understand what the mayor has against Pelicans.

Kriseman has never been afraid to walk the line of legality and good taste when it comes to getting his way with his Pier.

Kriseman has also never been one to let facts stand in the way of a decision he thinks needs to be made.

I think it's time to draw the line. Council member Blackman, and the rest of his fellow council members should proceed quickly with a project to design and construct a replica of the old bait house.

So where is the money going to come from?

The first effort should be to put out a go fund me request and see if the people of Saint Pete would like to see the old bait house back on the pier. Who knows, you might be able to raise enough money to do the whole thing and not affect the city budget one little bit.