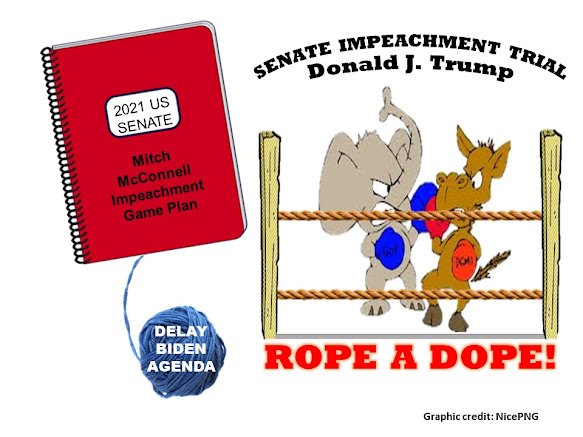 With the inauguration of President Biden, complete attention now turns to the first 100 days of the Biden presidency and the implementation of the Biden Recovery Plan For America.

In the Congress, things are anything but stable. The Democratic Party far left needs to begin immediately pushing their agenda while more conservative Democrats are going to struggle to find a way too efficient management of the congressional agenda.

Over in the Senate, Mitch McConnell, has some plans of his own. Some wonder about The Republicans approach to managing the Senate trial for the impeachment of now former President Donald J. Trump.

The Senate is faced with two pathways that they must pursue. The first and the one managed by the constitution is the impeachment trial of the former president. The second, is the pressing necessity to move forward with Biden’s Recovery Plan for America and the rest of the Biden agenda.

It's the old Muhammad Ali rope-a-dope all over again. McConnell will be more than happy to allow the Democrats to call endless witnesses in the impeachment trial of former president Trump, call his own witnesses and allow for lengthy periods of discussion while the Biden administration tries to move forward.

Since McConnell has the constitution on his side regarding the precedence of the impeachment trial, and no particular issue to be in a hurry, one way or the other, the Republicans in the Senate and in the house, for that matter, are going to be perfectly comfortable standing by and watch the Democrats twist in the wind as they try again to get a conviction of former president Trump.

The Republicans do have an issue in the outcome of the impeachment trial. There are many in the Republican Party who see this as an opportunity to permanently sideline Donald Trump from Republican politics. It's a dangerous ruse given the almost fanatical loyalty of Trump supporters and the party's inability to convince those supporters that Trump is a bigger political liability than he is a leader of the party.

It would be hey classic victory for McConnell and the Republican Party if the ultimate outcome of the Senate trial is all the Democrats voting to impeach Trump and should there be a tie, Vice President Harris casting the deciding vote to seal the impeachment.

At that point Republican Party leadership can simply blame the Democrats for taking those fervent Trump supporters’ iconic leader away from them.

It will be classic congressional politics at its best, and it is certain to be a riveting television spectacular played on everything from PBS to YouTube.