Fanning the Flames of Anarchy Who's Really Guilty? 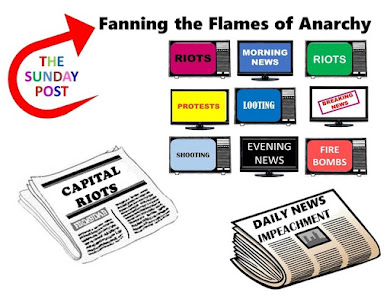 As evidence keeps mounting that the attack on the capital was at least partially planned by white right-wing extremists, concern grows that these radical offshoots of our society may be planning even more attacks on government infrastructure.

It's interesting that the social media outlets such as Twitter, Facebook, Google, and others have moved to remove far right hate rhetoric from their platforms and limit the ability of these organizations to use these valuable platforms as mediums to distribute their propaganda and hate speech.

Contrast that with national and local media.

Virtually every major newscast leads with stories related to the attack on the Capitol, future attacks on state capitals, and constant detailing of the far-right agenda.

Almost all the electronic media networks: NBC, CBS, ABC, Fox News, and even good old standby PBS continued to harp and harp and harp on the attack on the Capitol, future planning for attacks on state capitals, and a rehash of the far-right agenda.

The front page of virtually every newspaper is ablaze with images from the Capitol attack and reporting and commentary on the far-right agenda.

While they appear to be denigrating President Trump for the capital attack, they are doing all they can to stoke future attacks.

There is no doubt, that the mainline media absolutely hate Donald Trump. He is the 1st president in history to openly call them out for their biased reporting, and as he likes to put it fake news. I do not necessarily agree with Trump's view of the press, but one thing's for certain his continuing stinging comments regarding the press, especially the electronic press has resonated with many people in the country.

As much as the print media and the electronic media in this country revere themselves as protectors of the democracy, their reporting on the Trump presidency, and these attacks on our Democratic society are a bigger attempt at selling newspapers and gaining ratings, then they are reporting the news.

Maybe it is time that our friends running the major media outlets take a cue from the people running the social media platforms. It may be time to dial down the reporting and let the alt right find somebody else to promote its agenda.

There have been some concerns about social media censoring free speech, but I believe common sense tells us that providing free an unfettered opportunity to spread hate fear and anger is not beneficial for the preservation of our society as we enjoy it.