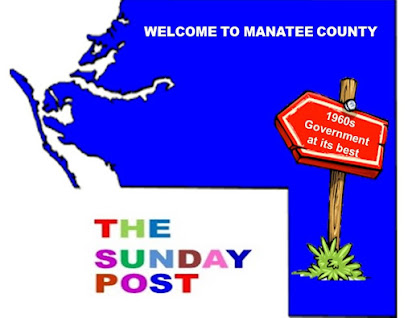 For a fleeting moment, it appeared that the recent Manatee County Commission elections for County commissioner, we're going to produce some actual change.

At the initial County Commission meeting, including the newly elected three members and a reelected member, it was decided that there would be a review of the current County administrator Cheri Coryea and a meeting to discuss her future would be scheduled for January 6th.

It should be noted that the District 7 commissioner at large Commission member, George Kruse, did indicate that he was withholding his final judgment on the decision to potentially replace the County administrator pending the outcome of meetings and discussions with various members of the community.

Apparently, following his conversations with community members Mr. Kruse had a change of heart about a change of leadership in the Manatee County administration.

I'm sure the hint of a public records request lawsuit also wasn't much encouragement for Commissioner Kruse to continue.

While it might have appeared a little aggressive, this move to replace the senior leadership in the County administration would have been the best way for these four future thinking commissioners to get the change process underway.

The fact that there was immediate opposition from the administration, from their other Commission members, from the press and others, should have been anticipated.

If you think, anything that happened since that first initial Manatee County Commission meeting happened by accident you are sadly mistaken.

Here is the thing these new commissioners need to understand. All local governments, in fact, every government in its entirety is a continuum. These governments have a finite beginning an absolutely no end. They are dedicated to their own self-preservation. They are very good at it, and you just saw a classic example of how they go about it.

The bold move by these four incoming commissioners and the actual replacement of the County administrator would have set the stage for significant change in the way Manatee County does business. That opportunity is completely lost.

Everyone in the current County administration, including administrator Coryea will be playing defense from this day forwards. Commissioner Kruse and his three fellow commissioners can expect unparalleled scrutiny of all actions and comments.

Kruse says he wants to wait for a year to reevaluate the administrator's performance and then perhaps reconsider his decision. A year from now Manatee County will be five years further behind.

For a brief moment Commissioner Kruse and his fellow, incoming Commission members held the opportunity in their hands to begin moving Manatee County from the 1960s to the early part of the 21st century.