In what could best be described as a desperate and futile measure, Representative Chris Sprowls a Palm Harbor Republican and the incoming House Speaker and Senator Janet Cruz a Tampa Democrat and former Senate Democratic leader have announced a lawsuit that was filed in the Florida Supreme Court asking the court to remove Amendment 3 from the November ballot.

Amendment 3 which you may not be familiar with, eliminates closed party primaries and allows all voters to vote for any candidate they wish in the governor's race, the cabinet and the state legislature.

What this would do is allow a large number of voters who have opted to register as independent to participate in the primaries and have a vote in who actually becomes the candidates for the final or general election for those state offices.

If you're interested in more detail, there's an excellent article in the Tampa Bay Times E paper entitled lawsuits seek to remove Amendment 3 from the ballot it's written by Mary Ellen Klas.

In March, the Florida Supreme Court ruled that the amendment met the legal requirements to be on the ballot, and that is why it's there for this November election.

The essence of the amendment is it eliminates Republican Party and Democratic Party control over who can run in the primaries and who can vote for them. The net effect of this amendment would be a significant reduction in party power over candidates, primaries, and the general election.

While the amendment challenge doesn't stand much of a chance due to its timing and the Supreme Court approval of the ballot language,  it is revealing in today's political climate about how desperate the two major political parties are to maintain control.

As more and more millennials opt to register as independent, I think it's important that they have an opportunity to influence who the candidates will be in the general elections for these state offices.

The actual functional details of Amendment 3 can be a bit confusing as you read them. In essence, it dilutes the power of the major political parties and allows independent voters to have a say in the primaries as to who will be the final candidates in the general election.

There are a lot of political reasons why this amendment would cause significant issues, and if it should pass, which it probably should, there will undoubtedly be an enormous legal fight over whether or not it is constitutional.

I think the constitutional fight and the revelations to the voting public about how much the two primary political parties control the political process and who actually gets nominated and who ultimately gets elected will be of great benefit to the general citizenry.

If you’re a millennial and registered as an Independent (No Party Specified) you should seriously consider this Amendment. It deserves your vote.

If your registered as a member of a political party and not all that happy with how the State political Parties operate, I think it deserves your vote. 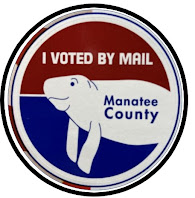