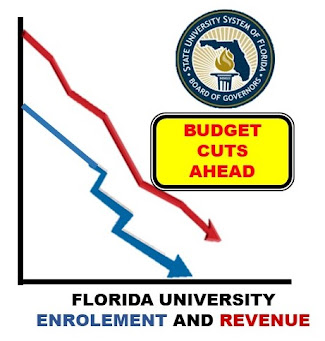 It will be interesting to see how the academic elite, and these massive educational organizations face the reality of downsizing.

During the past decade, Colleges and universities of all stripes have enjoyed massive enrollment increases and massive revenue increases from rising tuition and easily available student loans.

As the money increased the level of administrative overlay increased, tenured positions increased, colleges and schools of specific liberal education have grown and expanded as the University system became, irrelevant, overblown and over bloated.

Recently, I noted that the president of the University of South Florida earns right at or just over $600,000 a year. While some of the State University presidents have agreed to take minor salary cuts, the massive amount of money spent on administration and tenured professor salaries is difficult to justify.

If you look through this article and take note of how this decision was arrived at and how it was announced you just have to ask yourself if the people that are running this show are really worth the money they are being paid.

Typically, the approach to declining revenues in the academic world is to throw academic work on the chopping block that everybody, other than the administration, sees as highly valuable and threaten to eliminate it. It's almost a form of educational ransom: we're going to kill this program unless you give us more money.

The State and the Board of Regents seem to be and should be taking a hard line.

It's time to bring the University system back to reality.

It's also time for the academic elite to shed their self-righteousness and get back to the business of educating students for the real world.

So, during all this budget cutting, colleges and universities should start not at the program level but at the administrative level.

It's time for a complete retooling of a higher education as we see it.

If they want to raise more money and drop programs, then let's raise the tuition on the non-job producing programs. Those programs that feed the egos of the academic elite and produce useless degrees, and unemployable graduates.

The faculty in the College of Education at the University of South Florida in Sarasota Manatee are to some degree the visible victims of the lack of management skill rampant in Florida’s University system.

So, what is the purpose of all this?

Well, I suspect that the president of USF is hoping some wealthy benefactor will step in an open up his gigantic pocketbook and say oh no; no let me pay for all of that, or there will be such a hue and cry from the public regarding Florida’s increasing inability to educate the teachers for our children, that the state will cave in and throw more money at the University system.

For the benefit of education let us hope neither happens and the people who perpetrated this travesty are held to account for it.