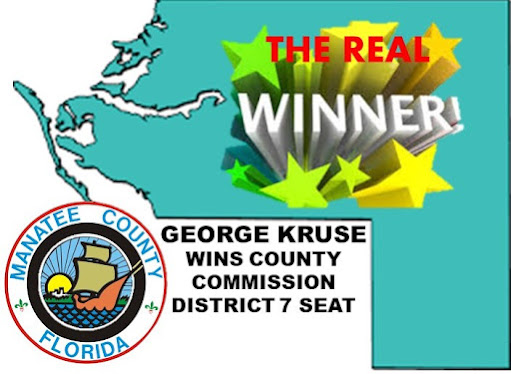 Tampa Bay
Opinion by: E. Eugene Webb PhD
Author: In Search of Robin, So You Want to Blog.

In Tuesday’s primary Election, Manatee County registered Republican voters sent a message to the big developers and those who support them when they elected George Kruse over Ed Hunzeker for County Commissioner at Large.

Since there was no Democratic candidate for the Manatee County Commission District 7 seat at large, the results of the primary election determined who would be the next District 7 commissioner.

Hunzeker, former Manatee County administrator, with heavy support from the big developers operating in Manatee County, looked to be the favorite in the primary election.

That balance of separation of powers is crucial to the operation of Manatee County in a legal, clear, transparent, and fair way.

The Unofficial results are shown below.

When the new Census data is published, it is quite likely that the demographic landscape of Manatee County will have changed significantly.

With the election of Kruse and another new County Commissioner, maybe The County administration can get back to running Manatee County for all the people who live here.