The News Media Too Much Riot Coverage 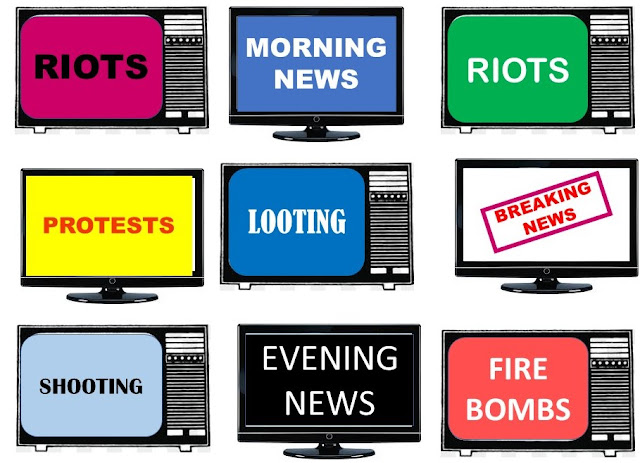 Tampa Bay, Fl
Opinion by: E. Eugene Webb PhD
Author:  In Search of Robin, So You Want to Blog.
Like a lot of you over the weekend, I watched and read a great deal about the riots and the looting in Minneapolis and locally in Tampa, Saint Petersburg and around the country.
It was a seemingly endless stream of the same clips on TV played over and over and over and over. Sunday, some of the newer channel 13 news reporters seem to drift more from reporting to opine their opinions.
With local news cycles now starting at 4:00 PM and running in some cases until 8:00 PM, multiple hours of continuous reporting about these horrific negative events seemed to be almost pointless even to the excess of encouraging the very actions they are deriding in their coverage.
I have frequently been involved in conversations where the subject is: at times like these, does the media contribute to the violence?  I have often heard the question asked, "Would demonstrators be there if the cameras were not?"
For some insight, check out this article:
From the CONVERSATION by Danielle K. Kilgo, Assistant Professor of Journalism, Indiana University: Riot or resistance? How media frames unrest in Minneapolis will shape public’s view of protest.
From Dr. Kilgo’s article. “The general public’s opinions about protests and the social movements behind them are formed in large part by what they read or see in the media. This gives journalists a lot of power when it comes to driving the narrative of a demonstration.”
While portal to portal coverage on national and local TV is the prime objective of those who insight these events, the power and reach of social media have created a new opportunity to fuel the public demonstration machine.
From my point of view, it is time for the national and local news media, and especially the local news media, to dial it back a bit. News editors and directors need to rethink their coverage of these events and resist the temptation to sensationalize the negative parts of a serious issue.
There's a lot going on in this world from the CORNA19 virus to the space program to a lot of good things that go on in our community, and I think a four-hour  newscast that focuses primarily on a comparatively small group of people protesting with some committing outwardly violent and illegal acts is just simply counterproductive.
After the first 30 minutes or so, it is not news anymore it is just simply tabloid sensationalism. Every major news outlet in the Bay Area is guilty. And the Tampa Bay Times doesn't get a free ride on this one either.
It also seems to me, that local assignment editors need to reign in their new recruits, so they don't get carried away with the moment when they're out on the street, and people are breaking out windows, tear gas is floating in the air, and things are really getting ramped up.
When I was in college, I spent quite a bit of time driving the mobile news unit for a local radio station in the town where I lived. I remember my assignment editor telling me over and over and over again, “Just report what you see and keep your opinion to yourself.” That was good advice then, about 50 years ago, and it is still good advice now.
My final thought, too much of a bad thing is not news, it is just too much.
E-mail Doc at mail to: dr.gwebb@yahoo.com or send me a Facebook (E. Eugene Webb) Friend request. Like or share on Facebook and follow me on TWITTER  @DOC ON THE BAY.
See Doc's Photo Gallery at Bay Post Photos.
Disclosures:
Please comment below.