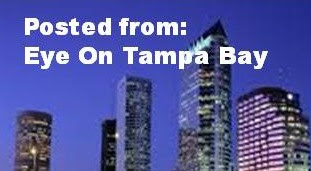 Pinellas County's transit agency PSTA is a fiscal mess. PSTA's financial position has been declining for years and their fiscal distress began long before the coronavirus pandemic.

Whether thru incompetence or willful neglect, PSTA has refused to address their fiscal mess. The pandemic has devastated PSTA's ridership even more causing their financial position to worsen. The State or the Feds should not be handing out bailouts to PSTA that will mask or cover up PSTA's own incompetence and/or neglect.

PSTA's CFO presented their 2019 Comprehensive Financial Annual Report (CAFR) at yesterday's (May 27) PSTA Board meeting. PSTA's financial picture is not good but the PSTA Board rubber stamped their approval of the CAFR with no discussion about it or any questions asked. 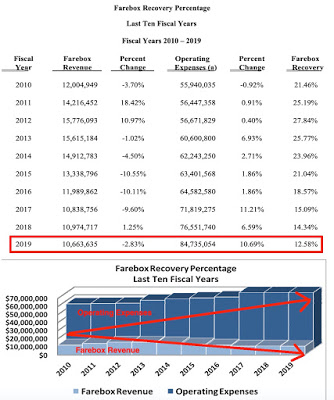 The number of PSTA employees increased from 576 in 2010 to 621 in 2019, an increase of 45 employees while PSTA's ridership and financial position continued declining.

PSTA had an unsustainable operating model before the pandemic devastated PSTA's ridership even more. The PSTA Board, who is supposed to provide proper oversight, refuses to publicly discuss, ask questions or publicly acknowledges PSTA's fiscal mess as if they do not exist.

PSTA promised the public and taxpayers they would address their financial issues after the Greenlight Pinellas rail tax was defeated in 2014. But they refused. Instead, as we posted here, PSTA uses taxpayer dollars to hire well connected State and Federal lobbyists to pursue more taxpayer dollars.

Glenn told PSTA that he has spoken to the FTA and the FTA says they have everything they need for the project and are reviewing all the paperwork. Glenn also stated he expects a final decision by the Feds by mid-year - which is now just a few days away.

But Glenn has made erroneous statements before. As this February Tampa Bay Guardian article reported, Glenn erroneously stated the FTA grant program was "not a competitively awarded program" but "you work through the process and as you check off the boxes, funding will become available to you.”
READ THE ENTIRE POST HERE: Fiscally Distressed PSTA: No Bailouts, Shut Down the Central Ave BRT Boondoggle and Hire a New CEO
Posted by Sharon Calvert at 6:34 PM