Are The Republicans Making the Wrong Call On Felon Voter Rights 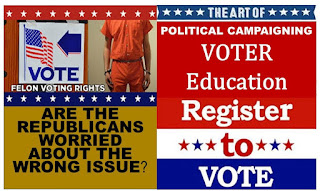 Reposted from earlier
Tampa Bay, Fl Opinion by: E. Eugene Webb PhD Author:  In Search of Robin, So You Want to Blog.
The Republican Party of Florida has long opposed the restoration of felon voting rights.
When the voters passed a referendum restoring felon voting rights, the state legislature passed a bill defining all terms to mean that all fines, fees and restitution connected with a case would have to be paid before a convicted felon regained the right to vote.
Below are a couple of links that should bring you up to date on the Florida voting rights issue.
From the Intelligencer: By Matt Stieb: Federal Judge Overrules GOP Poll Tax for Ex-Felons in Florida.
NPR by   Daniel Rivero: Voting Rights For Hundreds Of Thousands Of Felons At Stake In Florida Trial
Florida has already lost a number of legal skirmishes regarding the felon voter rights issue.
This past week US District Court judge Robert Hinkle ruled against a Florida law limiting the scope of amendment 4, which allows most felons the right to vote.
At this point, it is widely suspected that Florida's Governor Ron DeSantis will appeal against the finding.
It seems to me, that the Republicans are chasing the wrong rabbit in the voter rights for felons’ issue.
The people have voted; the constitutional amendment has been approved, and I think the risk the Republicans run is having voters of all parties of good faith begin to see the Republican’s effort as simply a self-serving political gesture.
The Republican political argument is simply a large number of these felons who register, and vote will do so as Democrats. There's no real data to show this or substantiate what is essentially a political fear.
I think it's time for a new Republican strategy. After all, the best political campaign is one that educates the people.
The Florida Republican Party should set up a committee dedicated to educating felons and registering them to vote. This committee should establish mirroring groups at each County GOP organization. The one thing that The Republican Party needs to avoid is driving these new voters to the Democratic Party through a series of efforts to restrict their access to the polls.
It is really time for the Republican Party and the governor to take a big step back from the “approach let's keep them from voting” to a program of “let's get them registered as Republicans.”
If the Republicans don’t change their strategy, the Democratic Party of Florida is going to have a field day signing up and registering Florida's released convicted felons and at the same time probably gaining favor with Republicans, especially sympathetic ones when it comes to voting.
The Republican party's continued efforts to fight felon voting rights for the upcoming presidential election violates one of my grandfather’s primary tenants of life. It simply says, "Never hand them the bat to beat you to death with."
E-mail Doc at mail to: dr.gwebb@yahoo.com or send me a Facebook (E. Eugene Webb) Friend request. Like or share on Facebook and follow me on TWITTER  @DOC ON THE BAY.
See Doc's Photo Gallery at Bay Post Photos.
Please comment below.
COMMENTS:

No, Republicans have not made a mistake. Rather, they have stuck to the law and to their principles. Voting is too precious a privilege (not a right) to allow it to deteriorate into biennial anarchy. By their actions, felons have thumbed their noses at the law. There is no logical in support of granting them a say in making the laws. Praise Republicans for standing up for their beliefs, praise them for having the fortitude to stand up to the left wing media (you, too, apparently), and support them in their long effort to maintain Constitutional democracy in the United States on Felon Voting Rights – Are the Republicans Making a Big Mistake?