Tampa Bay Rays - will they cross the Bay or not?

If you were calling balls and strikes on the game of where the Rays will play this was high inside fastball. 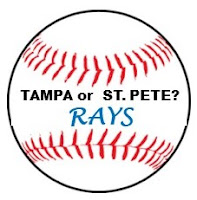 Opinion by: E. Eugene Webb PhD
Author: In Search of Robin, So You Want to Blog.
The ongoing saga of the next home for the Tampa Bay Rays continues with Hillsborough County administrator Mike Merrill throwing down a gantlet…. er maybe a bat, when he declared, “there will be no ballpark in Ybor City — and no Major League Baseball team in Tampa, continuing: If we can’t come up with term sheet by March of next year we’re basically done anyway.”
Check out more detail from the Tampa Bay Times, Charlie Frago: Hillsborough’s top administrator sets do-or-die deadline for Rays stadium deal.
If you were calling balls and strikes on the game of where the Rays will play this was high inside fastball.


Negotiations for these stadium deals have never been easy, but as the cost has risen and the actual benefits of a major-league team seem to be diminishing packaging a deal for almost a billion dollars is no easy task.
St. Pete and its intrepid mayor have been sitting on the sidelines watching Tampa and Hillsborough county squirm as they try to put together the new stadium pieces most likely with some glee. However, as all of this has been going on St. Pete has been steadily exploring redevelopment options and opportunities for the Tropicana site, and my guess is what they are finding is life without the Rays complicating things would be really nice.
It looks like Hillsborough County will need a little more time to reshuffle their financing line up, and that will require that St. Pete approves an extension of the current agreement allowing the Rays to look for a new home.
If that extension request receives a hearty endorsement from the Kriseman Administration read that as an encouraging slap on the Ray’s fanny and nod to Merrill, Buckhorn, Hagen and all other Hillsborough stadium supporters that St. Pete is pulling for you.
If the Hillsborough deal blows up completely, the Rays will find themselves in an interesting spot. St. Pete and especially the Kriseman administration now understands the real value of the Trop site and while they will probably be OK with the Rays staying, baseball will be a feature of the redeveloped Trop site not the centerpiece.
It has to be that way because major league baseball as a development driver simply does not work, and as former Baseball Commissioner Bud Selig said decades ago this is just not a major-league baseball market. His words still hang over Tampa Bay Baseball like a dark cloud and especially so if you are being asked to pony up a ton of money for a new stadium.
E-mail Doc at mail to: dr.gwebb@yahoo.com or send me a Facebook (E. Eugene Webb) Friend request. Like or share on Facebook and follow me on TWITTER  @DOC ON THE BAY.
See Doc's Photo Gallery at Bay Post Photos.
Disclosures: