Catching Up on the new Hillsborough County Sales Tax


All for Florida Transportation - What's really going on?

Hillsborough County’s new All for Florida Transportation sales tax increase has been drawing a lot of attention.

Local Blog Eye on Tampa Bay published by Sharon Calvert has been following the new tax and its implementation.

If you have not been following this new tax development you may want to catch up. Here are excerpts and links to the latest Posts: 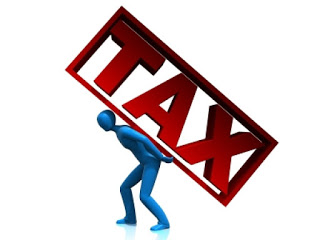 All for Transportation's $16 Billion tax hike was created by a few urbanist transit advocates over drinks. Their campaign funded by special interests sold their creation as a 30 year "plan" to fix transportation in Hillsborough County.

But there is no plan for implementing anything.

Governor-elect DeSantis left the Swamp in DC to run for Governor.

DeSantis supported Trump and he received support from Trump that helped him trounce Adam Putnam in the Primary. DeSantis went on to narrowly beat Gillum in the General.

Unfortunately, while DeSantis promised to keep taxes low and oppose tax increases in Florida, the Tampa Bay Swamp who want higher taxes are already on their way to Tallahassee. 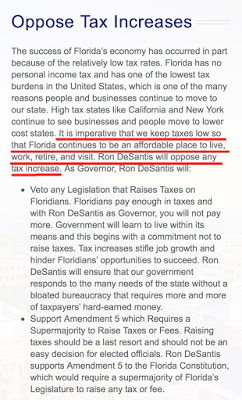 DeSantis has been making announcements - his transition team, his inaugural committee and an economic committee that caught the Eye.

We posted here about how those who want tax hikes were erroneously appointed to an economic committee to advise Governor-elect DeSantis for how to keep taxes low in Florida.

It's bad enough the Tampa Bay Swamp tax hikers were appointed to such position but the optics got worse.

The committee is meeting in Tampa tomorrow. According to this Tampa Bay Times article:
The Transition Advisory Committee on the Economy, led by former state Speaker of the House Will Weatherford, will gather at the university’s Center for Advanced Medical Learning and Simulation at 1 p, m, on Wednesday, Dec. 5. The public may attend.

The committee to advise DeSantis on how to keep taxes low in Florida has its first meeting in Hillsborough County who will now have the highest sales tax rate in the state of 8.5% And it was the Tampa Bay tax hiking swamp creatures appointed to this committee who are responsible for the tax hike. They funded the $4 million campaign of deception to get the misleading tax hike initiative on the ballot. And they bought off local media to shut down any opposition to ensure their unnecessary massive tax hike got passed.

The Tampa Bay Swamp's tax hike initiative is so egregious that WTSP reported yesterday about a lawsuit being filed by Hillsborough County Commissioner Stacy White.

WTSP's report reflects how Hillsborough County's highest sales tax rate in the state compares to its surrounding neighbor counties. At 8.5% it will be the highest in the entire state of Florida.
Hosting this economic committee that is supposed to advise for how to keep taxes low in Florida in the county with the highest sales tax rate in the state is the poster child of tone deafness.

The Republican Party of Hillsborough County Executive Committee voted on and passed a Resolution opposing the egregious rail tax hike. They recommended voting no on the 30 year $16 BILLION rail tax referendum.

Is DeSantis getting bad advice or what?

Did Will Weatherford, the leader of this committee, schedule its first meeting in Tampa?
Read More: DeSantis Committee for Low Taxes To Meet in Hillsborough County with Highest Sales Tax Rate in FL .......

Curiously, the Tampa Bay Times recently started reporting the All for Transportation tax hike will raise $15.8 billion over 30 years, while they consistently called it at $280 million per year, $9 billion tax before and just after the election.

Here are just few examples from their recent reporting:
Hillsborough County Commissioner Stacy White filed a lawsuit Tuesday seeking to invalidate the 30-year, $15.8 billion transportation sales tax that voters approved in November.
Now, a TV station is reporting that White plans to go to court to try and stop the three-decade, $15.8 billion tax from ever being collected.
Commissioners instructed county staff to start identifying road and sidewalk projects that could get started in 2019 thanks to the new revenue stream the 1-cent sales tax will generate, estimated to be $302 million per year.
But in the prior months, they called it a "$9 billion backlog", or conflating the AFT amendment with the Hillsborough MPO LRTP.
But no one has come up with the money for any of this work, or for hundreds of other transportation fixes across Hillsborough County that now add up to some $9 billion. The latest stab at an answer comes from a citizens group backed by business leaders grown weary of inaction by government leaders. They’ve succeeded in landing a proposal on the Nov. 6 general election ballot to raise the sales tax by one cent on the dollar and bring in $276 million a year for road and transit projects..
The 30-year transportation measure will add a penny on the dollar to the sales tax and raise about $276 million per year.
Estimates from a long-range plan by the Hillsborough Metropolitan Planning Organization say the 30-year tax would raise about $8 billion in its first two decades. The plan, developed in 2014, does not provide estimates for the final 10 years of the tax.
AFT has stated their plan was based on the MPO's 20 year LRTP. The AFT tax is over 30 years. That should have been the first clue that the Times should not have compared AFT with the LRTP. AFT obviously cherry picked their preferred projects from the LRTP for their "plan", such as restricting funding for new road capacity, while the LRTP had included $1 billion over 20 years.

Stay with Eye on Tampa Bay for the real info on the new Hills borough County sales tax increase.