Residents on the hook paying for 9,000 noise calls

How many addresses have repeat noise calls? 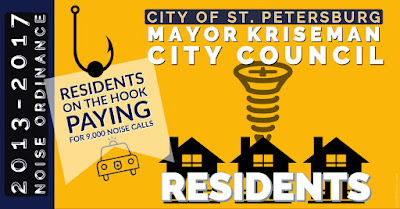 Residents of St. Petersburg, Florida are on the hook for 9,000 noise calls because the City’s Noise Ordinance has not worked. The Mayor Kriseman, the City, and City Council had not conducted any data analysis or trend analysis to know the noise issue was citywide. They “assumed” this was a downtown issue. Or did they want it to be? They almost got away with it until a resident started diving into the data. Now, the Police have labeled me a reoccurring complainant.

The City Council are poised to revise the Noise Ordinance for the second time in two years. They have refused to implement the decibel standard, and want to keep the plainly audible definition.

St. Petersburg City Council’s Public Services and Infrastructure (PS&I) Committee does not have an open forum for residents to voice their opinion. However, PS&I Committee Chairman Steve Kornell allowed two downtown lawyers, both former Mayors, to speak on noise ordinance revision. By only allowing downtown to speak before the PS&I Committee, Council reinforced their perception that the City noise issue is only a downtown issue. There has been no representation for the citywide residences, though I have asked to present.

Public Records Requests were used to collect the noise data and police reports, and analyze the data. I have presented my findings to the City at Council and to Planning & Zoning, all of whom were unaware there was a noise issue outside of downtown with bars and residents.

After the 2nd Public Noise Ordinance meeting, I asked the Planning and Zoning Director Goodwin to create a 2016 Heat Map of the noise. He replied that it was too much work. Since I was well versed in the data, I created the heat map and posted online.


City has the ability to generate a Noise Heat Map that can separate the number of calls and location, so the Mayor, Council, and Police Department can see where the noise is. Reports can be generated of the data so Police can be proactive.

When Planning & Zoning wanted to create the heat map, they asked to meet. I provided insight on the data nuances, and what I learned from building the 2016 Noise Heat Map. To properly count the number of noise calls, I shared the challenges that required refinement of the data collection process. Since they are the City, they could obtain the data and reports for free, whereas, I my scope was limited because the City would charge me for the Public Records Request for data, audio of the calls, and reports.

While the City had the ability to create a clear picture of the noise calls, the 2013-2017 heat map did not use all the available data and the project scope was reduced. The City's Noise Heat Map was not made available to the public.

While the City presented the 2013-2017 Noise Heat Map to City Council, this was not shared with the Public. This should be posted on Planning & Zoning's web page for all residents to see.

The Mayor and City Council members should share this with residents. This would serve to educate residents on where the noise is. This message could also share the crime data for the locations. This would provide the City of St. Petersburg government with transparency.


What is the distribution of calls to residents and businesses?

Table 1's data shows 20% of the addresses are residential, and 13% are bars, restaurants and businesses. The City has the ability to identify homes but did not. The residential percentage would be higher if the homes were identified in the City's data table.

Council should request this data.

Mayor Kriseman should provide this key missing data that will show exactly how many residents have reported noise at a nearby home. Previous Public Records request show there are far more citations issued for individuals and homes, than bars. The Police should share this data with City Council Members.

TABLE 1. Addresses Identified by the CITY as Having a Noise Call Assigned to a Location 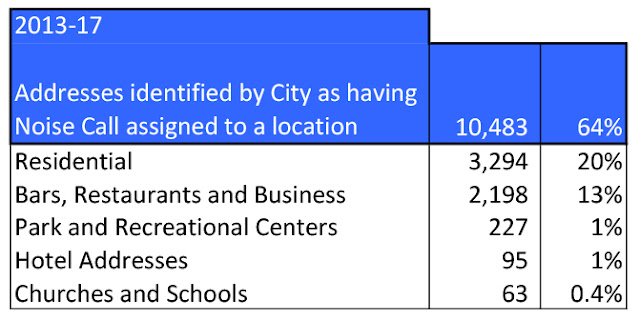 While Planning & Zoning presented the Noise Heat Map to Council’s PS&I Committee, the important data points were not included. Table 1 provides some of these data points. The 2013-2017 data identified 16,417 noise calls, but only 10,483 locations were identified with business or residential condominiums or apartments. There are 5,934 locations not identified.


What are the nuances that I have learned?

The key findings are:


How may Address have Repeat Noise Calls?

There are 11,204 addresses with repeat calls. This is where the City can use the decibel standard to save resident tax dollars.


The current plainly audible standard does not work because the Police have not trained officers.

The current plainly audible standard does not work because the “Plainly Audible” noise standard is subjective to police’s hearing.


Sec. 11-47. - Definitions.
Plainly audible means any sound produced by a source, which can be heard by any reasonable person of ordinary sensibilities using his or her unaided hearing faculties. Measurement standards shall be the auditory senses. Words or phrases need not be discernible and low frequency sound reverberations are included.

Even though the ordinance states, “which can be heard by any reasonable person,” the police officer must hear it to issue a citation. Therefore the noise must be plainly audible to the police officer, which is subjective.

Each officer's hearing varies across the sound spectrum. This varies with audible music, high pitches and bass. While one person may react to a baby crying at a restaurant, another person may not be bothered. Officers also report hearing loss due to weapons training.

Responding police officers overlook an important aspect of the definition,


Words or phrases need not be discernible and low frequency sound reverberations are included.

Officers are not trained on noise's impact to adult and kids health. Loss of sleep, irritability, and anxiety are a few of the health issues.

The other factor police are not trained on is duration. The police respond but are only there a couple minutes. Thus, the officer, who is there for a very short, thinks this is OK to them. Whereas, the resident may be subjected to the noise or bass for one to six hours or more.

However, the citation is based on the officer's perspective who does not have to live with the constant thumping or loud music that may ramp up and down. No wonder, residents state that they cannot sleep!


Police Chief Holloway has not provided adequate training for his officers.

Again, Police Chief Holloway is not ensuring his officers are properly trained on noise.

Police Chief Holloway failure to provided adequate training for his officers has accounted for an 0.57% Citation rate and an high repeat call rate. This is abysmal. 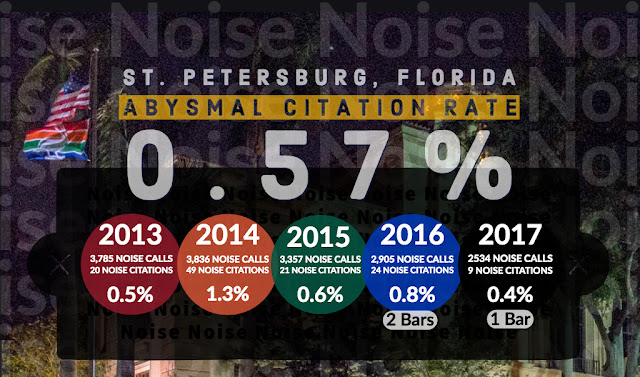 How many repeat calls were there?

Table 2 shows the number of repeat calls that occurred. Had police implemented a training program, a tracking system for when warnings are issued, and a repeat noise identification report, they could have had not responded 9,000 times. This is based on those addresses with >3 calls.

Table 2. Count of Addresses with 1 Call and Address with >1 Call 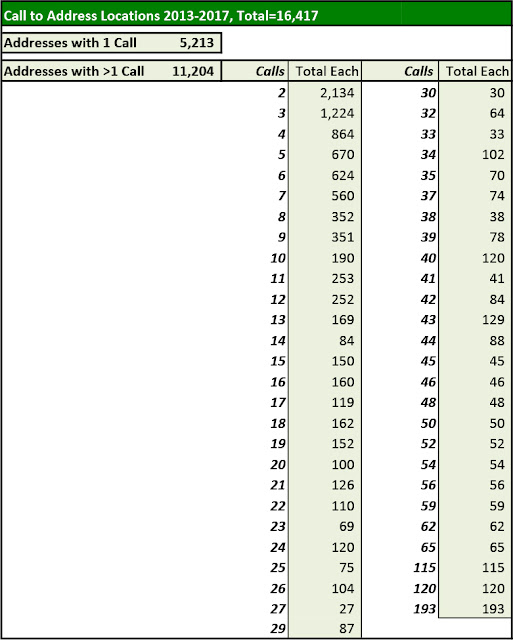 Figure 1. Addresses with 1 Call and Address with >1 Call 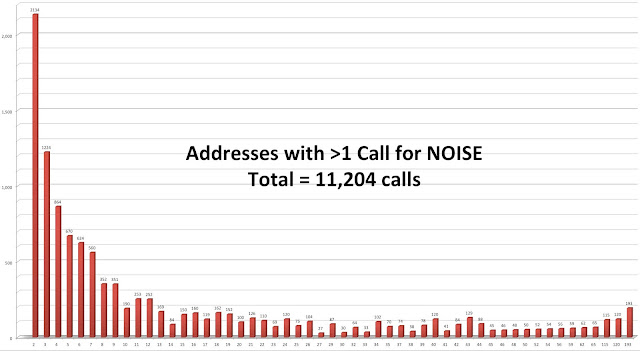 What is the cost savings to the Police Department?

Officers could have been working other crime areas or cases. Mayor Kriseman and Chief Holloway must be held accountable.


What should City Council do?

This data should be sufficient justification for PS&I Committee to scrape the Option 1 recommendation, which keeps plainly audible, current distance and time requirements, and does not have a process in place for issuing warnings.

A decibel standard is the clear choice to protect resident's quality of life and health, enable officers to focus on crime, and save tax dollars!