"Every hot dog, beer purchased in that district will go 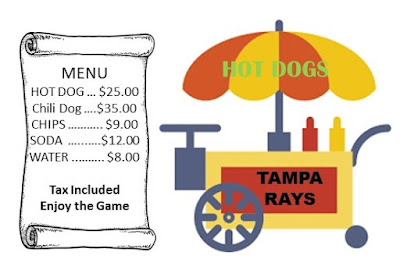 "Every hot dog, beer purchased in that district will go toward the stadium."

Taxing hot dogs and beer to pay for a stadium? Now you got my attention.

From the TBBJ:
A group of business leaders working on efforts to move the Tampa Bay Rays to Ybor City is evaluating different funding strategies for the proposed $892 million, glass-domed ballpark.
Ambassadors of Rays 2020, led by Tampa attorney Ron Christaldi and Chuck Sykes, CEO of Sykes Enterprises, spoke during a Rotary Club of Ybor City meeting on Sept. 12 and addressed the questions the Rays face, which primarily are concerns with how the stadium would be funded
.
"[We will be] working with the landowners to create a CDD type of environment for an entertainment district. Every hot dog, beer purchased in that district will go toward the stadium so it's not taxpayer money, it's a fee-based structure," said Hillsborough County Commissioner Ken Hagan, the county's chief negotiator with the Rays.

The entertainment district tax will be used to land more funding.
"We have to be extremely creative for the necessary funding. The goal on that is to cast as much of a wide of a net as possible," Hagan said.

We can be creative too, especially when it affects my hot dogs and beer.  I must have a hot dog at every sporting event I attend. I am not making this up. 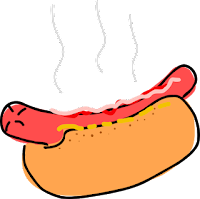 Just how many weenies will have to be sold to pay for the new Rays stadium?

The latest stadium cost estimates are $892 million, and the Rays, whose estimated value is $900 million, stated they will contribute $150 million to the overall costs. That leaves $742 million to be funded. By hot dogs?

The new stadium plans call for 28,216 seats, which is a reduction in the total capacity of Tropicana field, where attendance average is reported to be 14,700.

Using some simple math (and zero interest rate to keep it simple for now), assuming that every game sells out for 82 home games a year, and everyone is like me, needs a hot dog at every game, and $1 from each weenie "purchased in that district will go toward the stadium", it will take at least 320 years to pay off the stadium.

Thats a lot of weenies that are bought with "not taxpayers money", which begs the question... exactly whose money is it buying weenies?

Of course it is. As is the whole notion on funding the stadium with a CDD.

According to Wikipedia,
A community development district (CDD) is a local, special-purpose government framework authorized by Chapter 190[1] of the Florida Statutes as amended, and is an alternative to municipal incorporation for managing and financing infrastructure required to support development of a community.[1]
Florida has hundreds of CDDs, and they are meant to provide an alternative to funding the development of new communities from the traditional municipal governance. The developer takes a lead role in funding and developing the infrastructure, which in turn are paid back in fees from the residents of the development, which has been bonded out by the developer as municipal bonds. The developer is not paying for it. The new residents are.

CDDs can go bad, as they are typically dependent upon a 20 to 30 year payback schedule. Developments don't always go as planned, and Florida has at least 100 CDDs that are some form of financial distress.

Field of Schemes noted some inconsistencies with the CDD plans.
There are, however, a couple of problems here. One is that it’s not entirely clear whether a new stadium is the kind of amenity that actually makes nearby land more valuable — and if it doesn’t, you could end up seeing property values plunging as nobody wants to buy land that comes with a whopping surcharge, or even see the CDD go into default, as has happened from time to time. So if this does end up part of a Rays stadium funding plan, it’s going to be hugely important who’s on the hook for those payments if the CDD money falls short.

Then there’s that puzzling statement by Hagan that “every hot dog, beer purchased in that district will go toward the stadium.” He also said “we are not going to raise sales taxes,” so presumably there won’t be an actual surcharge on sales of stadium-district beer, just on property taxes for stadium-district beer gardens. Which is a pretty indirect and hand-wavy way of ensuring that the stadium will in some way pay for itself, probably because without the hand waving, it’d be immediately clear that there aren’t enough windfall hot dog profits to build a near-billion-dollar stadium.
So what happens when a CDD goes bankrupt?

New investors developers may take over. They may be able to buy the defaulted bonds at firesale prices, and develop new properties at much lower costs, reducing the value of other district properties, thus property tax revenues.

Of course, as with most of these schemes with CRA, TIF, and CDD, the ultimate backstop is the taxpayer. City of Tampa and Hillsborough County will be at risk of over a billion dollars to take over a failing CDD as central to the plans of the area as the new Rays Stadium.

Don't be surprised, as the fat cats behind the Rays Stadium are aligned with many other schemes to enrich themselves at the taxpayer expense. If there is one thing that is near unanimous across Tampa Bay, it is the fact that a vast majority of Tampa Bay residents do not what their hard earned taxes spent on sports stadiums.

Yet here we are again, politicians and business leaders ignoring the people the "serve".

Who's among those behind the Rays funding plan?

Chuck Sykes, whom we've documented as one of the lead cronies behind the special interest lead All For Transportation Transit 14% sales tax increase now on the November ballot in Hillsborough.

Then there is this, again from the TBBJ:
"We are talking to businesses that aren't here, tourism-related companies, talking to those kinds of companies, but also because of Brightline and that connection from Tampa to Orlando, we are starting to talk to more businesses along [Interstate] 4 even into Orlando," [Rays 2020 Ambassador Mike] Griffin said.

"The fact that walking distance from here we can [or will] literally walk to a train that's privately funded and be in Orlando in a half hour, that's really exciting," he added.
Griffin, on the thinking track of transit, also mentioned how important it is in general to have different modes of transit for the stadium.

The site already has parking within walking distance. More garages we will be built, but the existing infrastructure is in place, Griffin said. About 18 percent of people who go to ball games use Uber or Lyft, and it's projected that usage will increase to 30 percent by the time a ballpark is built, Griffin said, speaking on available parking spaces as well as ridesharing options.

"The other aspect to this is access to our waterfront. We are very close to our port. I believe we have a great opportunity to really open up our waterways, not just for recreational watercraft, but the expansion of our water taxi service to that vision of being able to get to this ballpark without ever stepping foot in a car is real," Griffin said. "They do it in Miami, I'm sure we can do it here."

Brightline's plans do not include any rail that will "be in Orlando in a half hour". That's not "really exciting". That's a lie.

This passage just confirms the linkage with the All for Transportation Transit Charter Amendment on the November ballot in Hillsborough. There is no parking nearby the proposed Rays Stadium. They won't be selling out those 28,216 seats unless they fix that situation.  They are expecting this transit boondoggle to save the day.

Something tells me more than my weenies are at risk.

If you have to ask, you are the weenie.

Posted by EyeOn TampaBay at 8:25 AM