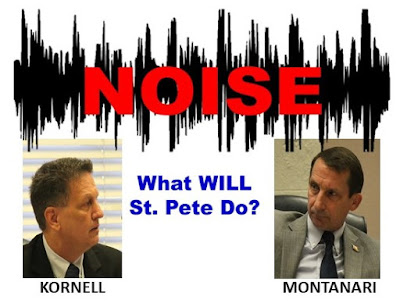 Can St. Petersburg be both VIBRANT and GREEN

If the City reduces the repeat calls to both establishments that serve alcohol and residences, then this will drastically increase resident's quality of life.


What do concerned residents want?

Concerned residents impacted by the noise have been held hostage by the bars and the St. Petersburg Chamber of Commerce. We support a stronger noise ordinance that measures the noise with decibel levels at a level that does not impact adult and children's health. We also want a noise ordinance that fines the bar or establishment that serves alcohol. The current noise ordinance fines an individual employee who works there. 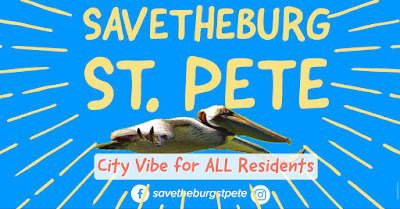 Can St. Petersburg be both VIBRANT and GREEN?

Mayor Kriseman's pro-business position has overlooked the noise issue. Several Council members are struggling with the meaning of the decibel level, duration of the exposure, and how this impacts your health.

The Mayor and Council want a vibrant city and “Green” presence, but the "green" part has been put on the back burner. The City of St. Petersburg's City Council has the opportunity to revise the noise ordinance and protects resident's quality of life.


Will the Democratic Majority on City Council Protect Resident's Quality of Life?

The Democrats have a 5-1 majority on City Council. However, there is one obstacle the Democratic majority faces, and that is City Council Member Steve Kornell, a democrat, who is Chair of Public Services and Infrastructure Committee. Kornell is pro-noise. His comments are available online at the end of the article.

It is important to remind Council that residents have suffered under the past and current noise ordinance. The City can make a statement with the noise ordinance revision and demonstrate a concern for resident's quality of life. City Council and Mayor Kriseman can either protect resident’s quality of life and health or cater to businesses and special interests led by the bars and the Chamber of Commerce.

The City Council is resident’s last line of defense residents have before seeking a legal remedy.

When Former Mayor Foster represented Jannus Live and several businesses, and spoke at a PSI meeting, he demonstrated a lack of understanding of the noise and the noise issue. Jannus commissioned noise study has serious flaws in its recommendations that support its position. The Jannus Live owner also spoke at the 2nd Noise Ordinance Public Hearing where he shared with the packed auditorium that he does not live downtown, because it is too noisy. Downtown residents did not appreciate that statement.

At the 2nd Public Hearing, the City was asked how many citations had there been. The City did not know. This graphic illustrates the City Noise issue and the lack of enforcement. 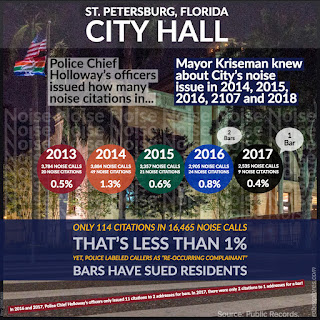 The World Health Organization’s recently published an article that has "recommended to avoid long-term damage, we should only expose ourselves to noise 70 dbs or less. Anything above 85 dbs is considered the danger zone for hearing loss. Exposure to 105 dbs – the average dbs in a bar – for at least one hour is enough to cause long-term damage.”


How Can You Help?

You can help by contacting your City Council Member, and Mayor Kriseman asking them to protect resident's quality of life. You may also attend the Public Services & Infrastructure Committee Meeting on Thursday, September 20 at City Hall, Conference Room 10. If you are unable to attend, this is available live on StPete TV and later on St. Petersburg's YouTube Channel.


https://youtu.be/GY-Asay6BkM
The opinions here are the author's and do not necessarily reflect the views of Bay Post Internet or the Blog Publishers where it appears.