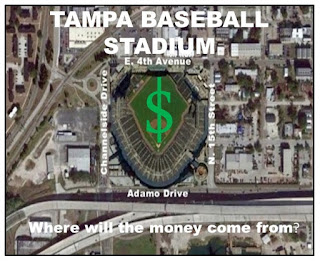 The money is important but is the long-term support there?


The quest for money and support to build Tampa’s new baseball stadium has begun.
Obviously, money is needed to build the $700 to $800 million stadium, but equally important is a significant out pouring of support for from the business community.
The battle to build a baseball stadium in Tampa has gone on for over a generation.
Check out this article from the May 1985  Los Angeles Times: Battle Rages On for Baseball in Tampa, St. Pete.
Here are some quotes:
Former New York Yankees president Cedric Tallis, the executive director of the Tampa Bay Baseball Group, calls downtown St. Petersburg "not the best area, you might say."
"We do have to get our act together," says Cecil Englebert, chairman of the Pinellas Sports Authority. "We have been told by baseball that a bridge, stream or a lake does not separate a marketplace."

But Englebert shares the prevailing view of those working for a team here: this is such a good market, baseball cannot afford to turn its back simply because the two sides cannot agree on which side of Tampa Bay a team belongs.

Here are some quotes:
Tampa is ready to build a $60- to $70-million domed stadium with private funds, Tallis said, but it would be a multi-purpose facility. Nevertheless, Tallis is confident this area will get a franchise. "It is a question of time," he said. "We think we're No. 1."

Expansion talk has virtually stopped in St. Petersburg, too, said Hubert Mizell, sports editor of the St. Petersburg Times. "It has gone into limbo because of the lack of encouragement from baseball. People got tired of waiting."

It is this support that gets major league baseball comfortable that the franchise can be a success.
Fast forward a decade to January 22, 1995 and an article from the Washington Post by Mark Maske: PHOENIX, TAMPA-ST. PETE LOOK LIKE LOCKS.
And then in 1998 The Rays played their first game at Tropicana Field. For a lot of Rays history check out this site: Today in 1998, the Rays played their first game in franchise history
Taking a look at a recent Tampa Bay Times article from February 2018 by Charlie Frago: On deck in Rays ballpark quest: Tampa Bay’s business community it does not look like a lot has changed other than the names and faces of the innocent and the guilty.
Back in the beginning, Baseball Commissioner Bud Selig did not think this was a baseball market, and a big part of the reason was the very lack of support that the Tampa group is trying to muster up. Baseball is a sport and a business of records, facts and statistics and the statistics have proven Bud Selig right.
Will things be any different in Tampa? Hard to say, but a key to the answer to that question will be whether the current baseball Commissioner Robert Manfred looks over the Tampa effort and gives it his blessing or another curse as Selig did.
For now, Tampa and the local baseball elite are charging down a familiar road of trying to buttonhole the big-business players and not so big-business players in the Tampa and Hillsborough community into commitments that will make the move to Tampa look viable from a ticket sales perspective and underwrite the new stadium.
Careful as you commit fellows and gals. We have heard all these songs before.
I was on the team that built the dome. I was on standby to go to Los Angeles when the Giants deal fell through, and I have sat in our 43,000 seat stadium with 3000 other people to watch a game.
After all that money, and all that work, all those sleepless nights, all the worry; all the hope and all the prayers the words of Bud Selig still ring in my ears – “this is just not a major-league baseball market.”
Have things changed? I certainly hope so.
It’s Tampa’s turn to bet the farm; to jump through all the MLB hoops; to promise and commit; to get caught up in the moment.
If you build it will they come and keep coming?
There is only one way to find out.
E-mail Doc at mail to: dr.gwebb@yahoo.com or send me a Facebook (E. Eugene Webb) Friend request. Like or share on Facebook and follow me on TWITTER  @DOC ON THE BAY.
See Doc's Photo Gallery at Bay Post Photos.
Please comment below.