St. Pete – noise or dollars which will it be? 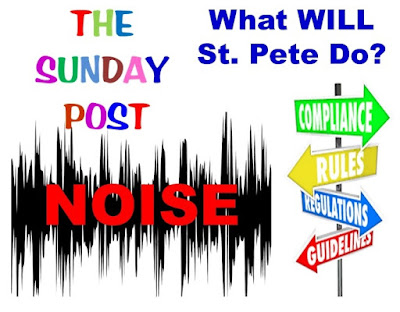 St. Petersburg, Fl
Opinion by: E. Eugene Webb PhD
Author: In Search of Robin, So You Want to Blog.
The City of St. Petersburg has been wrestling for years with the problem of noise. The arguments, mostly centered around the downtown area, have grown more strident as downtown St. Pete morphed from a simple “downtown” to a craft beer powered juke box.
The assault on any attempt to control or limit noise and the proposed St. Pete Noise ordinance is no exception see Fox News Dan Matics: Proposed noise rule frustrates St. Pete bar owners.

The argument from the bar and brewery owners is the loud music is what attracts the ever precious millennials through the door. Is that really true?

Do the millennials that these bar owners tout really like loud music?

Well, according to Bernadette Hasson writing for NightClub&BAR which bills itself as “The Bar Industry Authority” says, “In an anonymous survey, millennial's listed the following reasons for not going to nightclubs: cover charges, expensive drinks, long lines to get in, long waits for drinks, too-loud music, pretension, rude staff, crowds, getting jostled, meat-market atmosphere, inability to have a conversation."

With massive speakers pointed at the street, and the volume cranked up it is more like a circus midway than a city street. The objective is to get your attention, and nothing about setting a mood.

Try having a conversation in one of these places.

Then there is the impact on the surrounding businesses and residents and that is what this noise ordinance is all about.

Link to Noise Ordinance Update
An area like downtown St. Pete is all about quality of live and brew pubs, and bars are just one small part of the quality of life. These businesses would have you think the entire downtown will fold without a mass impact of a loud bass.

There some indication that a little softer on the music just might be better for business.

For now, we need to watch the Kriseman administration and City Council as they balance the sanity of those who live down town, and in other areas of the City plagued by noisy night spots with the claims of those who deliberately make the noise.

The next public meeting on the noise ordinance is scheduled for: 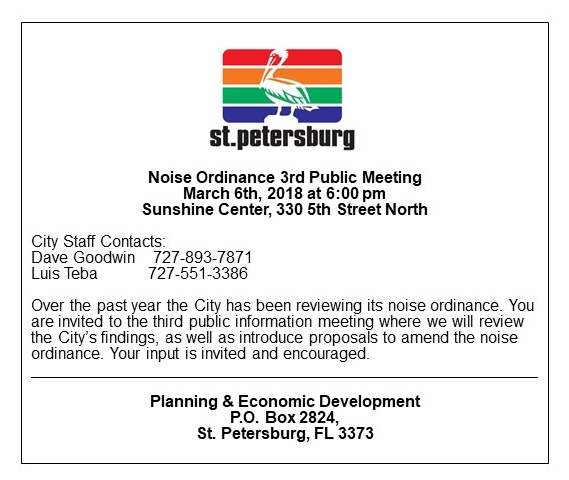