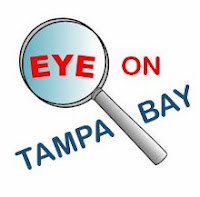 Commissioner Ken Hagan is now Candidate Hagan, R-District Rays. How did that happen? Thru a baseball stadium escapade that began years ago.

Commissioner Hagan, a Hillsborough county commissioner since 2002, has spent at least half his time in office pursuing a new Rays baseball stadium.

ABC (A Baseball Community) Coalition was formed in 2008 to study new sites for a new Rays stadium and according to this August 2009 article:

People can drive quickly to downtown Tampa or to the West Shore area. And Tampa's business base could support luxury suites, season tickets and corporate sponsorships. Hillsborough might explore the Rays moving to Tampa if the area is at risk of losing them to another city, County Commissioner Ken Hagan says.

The ABC Coalition provided a report and recommendation in January 2010.

Generally, and as a rule, private contributions to stadium construction have averaged 20 to 30% of construction costs, though wide variations exist from virtually all costs financed publicly to virtually all costs financed privately. To the extent that private funding is limited, the remaining funds must be identified through federal, state or local sources

Suddenly in February 2010, Hagan signed a letter as BOCC Chair, without informing his board colleagues, asking the ABC Coalition to present at a BOCC meeting. Some board members were not happy Hagan unilaterally did that without informing them.

Days later the ABC Coalition presented to the BOCC on May 19, 2010, the transcript is found here. Some takeaways from the presentation about a new stadium:
Hagan clearly stated at that meeting: "Well, I want to say I appreciate the comments from all the commissioners, especially those regarding not using taxpayer dollars, I've said that repeatedly, but it bears - it bears being stated again, so I appreciate that."

Hagan then proceeded to get a motion passed that "when the Rays make their long term intentions known, this Board is open and interested in having a seat at the table and being part of the discussion in an effort to ensure that the Rays remain in the Tampa Bay region."

In 2012, it was reported in this article Hillsborough leader willing to play "boyfriend" in Rays-St. Petersburg divorce:

Hagan said he wants a more active role in moving the discussion forward, including by courting the Rays, if necessary. He even volunteered to be the boyfriend in January when he saw team president Matt Silverman at a Rays charity event in Tampa.

In February 2013, these interesting reports were made:
Who owns season tickets?
Scouring Tampa Bay for Rays season ticket holders

Both Hillsborough County Commissioner Ken Hagan and Tampa Mayor Bob Buckhorn say they stand ready to seek a stadium solution on their side of the bay. Neither has season tickets, though Hagan once did before he ran for office.

By July 2013, the Transportation Policy Leadership Group (that morphed into the Go Hillsborough debacle) kicked off their first meeting in July 2013. We posted here how that kick off meeting was filled with the rail cartel.

At a July 25, 2013 Budget Workshop, Rick Homans, who was then CEO of the Tampa-Hillsborough EDC, was allowed to present his ask for $700K of funding from the county while stating the need to build public transportation and bring a stadium to downtown to create a "happening" downtown environment. (Note citizens/taxpayers at the budget public hearing that very same day who were asking the county to fund our roads got their usual three minutes allotted for a public comment.)

By August 2013, Hagan declared the stadium issue was "borderline dire."

...he [Hagan] had a meeting Thursday morning with County Administrator Mike Merrill and County Attorney Chip Fletcher to begin plotting Hillsborough's course of action. He said the discussion was general and ranged from discussing what organizations should be participants in a committee he hopes to form to serve as a go-between between Hillsborough officials and the Rays. The discussion also touched on upcoming talks between the county and city of Tampa about renewing redevelopment areas and special taxing districts, one of which includes downtown Tampa and areas sometimes discussed as prospective stadium locations.

Part of the discussion focused on the state's sunshine law and ensuring that any committee created doesn't include members whose participation would trigger open meeting requirements because they serve on other boards together. Hagan said he doesn't believe that will be a problem.

What was really dire then was the neglect by the county to properly fund our local roads and infrastructure.

It was also reported in this August 6, 2013 Tribune article:

A group of chamber of commerce leaders from Tampa and St. Petersburg formed a study group called the Baseball Stadium Financing Caucus and found that paying for a stadium would be difficult, but not impossible. Last November, it released a plan that considered, among other things, increasing hotel taxes on tourists, creating a new car rental surcharge at Tampa International Airport and tapping into Hillsborough County's Community Investment Tax, which among other uses helps pay for Raymond James Stadium's bonds.

The group even contemplated a novel way to raise money from wealthy immigrants. Through a program called EB-5, would-be immigrants essentially can buy a visa from the federal government if they are willing to invest either $500,000 or $1 million in a venture that creates jobs. The developers of the Brooklyn Nets' new arena used EB-5 money to pay for some infrastructure surrounding the arena.

The biggest source of money could come from a hypothetical regional tax, in which people from several local counties would contribute to a stadium fund. However, it would be hard to get people in one county to support a tax for a stadium located in another county, said Eric Hart, executive director of the agency that runs Raymond James Stadium, the Tampa Sports Authority.

In September 2013, it was reported that Hagan had been having conversations with Jeff Vinik and his team for the past six months or so about a downtown stadium.

By September 2014, Hillsborough county had just handed Parsons Brinckerhoff/Beth Leytham their crony $1.2 million contract to lead the failed Go Hillsborough campaign for another tax hike referendum. There seems to be a consistent connection between Hagan's push for tax hikes for costly transit and his push for a new baseball stadium.

Coincidentally, as reported here on September 27, 2014, Hagan planned to ask the commissioners at the October 1 BOCC meeting, to designate the Tampa Sports Authority to lead discussions with the Rays and he would setup a baseball committee:

If other commissioners approve, Hagan said Saturday, he would then set up a working committee to focus on finding a location for a Rays ballpark in Hillsborough, and the money to pay for it. The committee ideally would include Hagan, Tampa Mayor Bob Buckhorn, Tampa Sports Authority CEO Eric Hart, and a prominent member of the private sector, Hagan said.

The BOCC agenda for the October 1 meeting had already been distributed and sent out on  September 25, 2014, as we receive the email distribution of the BOCC agendas. Hagan's agenda item was not on the 9/25 version.

According to the article above, Hagan had told the media by at least September 27th, that he planned to bring the stadium/Tampa Sports Authority request to the October 1 meeting that begins at 9am on 10/1.

At 5:29PM on September 30, 2014 (we have the email and timestamp), thisaddendum was sent out adding Hagan's stadium agenda item.
Hagan's last minute agenda addition simply states "discussion". Discussion is a noun not a verb. Thus Hagan's agenda item, as stated. was not asking for any action to be taken. Click on the addendum link above and read all the other agenda items that are asking for action by the commissioners. They all start with a verb such as approve, terminate, adopt, authorize, conduct.

Note that Hagan's last minute agenda addition was to be considered as "Pursuant to Rule 13 of Rules of Order". Who, except the commissioners, county staff and county attorney, have any idea what that means?

Rule 13 of the county commissioners Rules of Order is found here. It provides the procedure for scheduling of BOCC agenda items. Basically, commissioners are not supposed to throw agenda items out requesting action by commissioners without proper notice and background information, except for some type of emergency issues like public safety, health, etc. We doubt many think a baseball stadium "discussion" is an emergency no matter how "dire" Hagan may have thought it was.

Commissioners may raise substantive, off-the-agenda matters only in instances where the County Administrator has been provided prior written notice thereof not later than 3:00 p.m. on the Friday preceding the regular Board meeting held the following week. Any item not meeting these guidelines, except for emergencies and external deadlines outlined above, will be scheduled on the subsequent Board meeting.

Obviously, the addendum was not made available to the public 48 hours prior to the October 1 Board meeting.

According to the transcript of the October 1, 2014 BOCC meeting, Merrill told the commissioners that Hagan's agenda item for a "discussion" to designate the Tampa Sports Authority as the agency to negotiate with the Rays stadium was added "pursuant" to Rule 13. That does not appear to be true because Miller, a stickler for rules of order, immediately made a motion to "waive" the rules for item F-1. The motion was seconded by Beckner and passed unanimously to legitimize Hagan's agenda item.

We highlighted parts of the October 1, 2014 BOCC meeting transcript but below are some  takeaways:
The entire premise for designating the Tampa Sports Authority as the agency to negotiate with the Rays was to ensure there were no Sunshine law challenges aka keeping everyone in the dark, including as we now know, Hagan's commissioner colleagues.

Stay tuned for updates about the Rays Candidate.