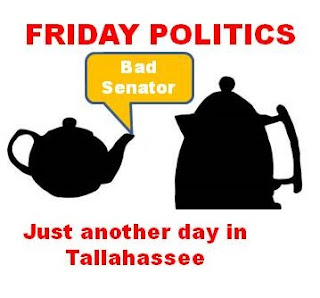 What struck me was how quickly the Senator's political allies, opponents and other politicians turned on their colleague.

I have followed with interest the fate of Florida State Senator Frank Artiles after a late-night rant among colleagues that went viral.

What struck me was how quickly the Senator's political allies, opponents and other politicians turned on their colleague.

Granted the Senator's comments were completely out of line by all levels of conduct, but the rapid rush to be on the condemnation train was, at times, almost laughable.

It seemed like if you didn't issue a statement calling out Artiles you were somehow condoning his actions.

Also fascinating was how quickly this whole mess "took over" the state legislature. Everything stopped as everyone from the Governor to the Tallahassee cab drivers expressed their overblown sense of being offended.

The other thing that struck me was how most of those doing the condemning are probably just one drink, one conversation, one tweet or one hastily constructed e-mail away from a similar fate.

Do not believe for a moment that all of this self-righteous caterwauling by the political elite in any way indicates how they really feel.

About the only real lesson you can draw from the Artiles incident, is politicians are much more interested in making themselves feel good at the expense of others than they are doing the people's business.

My grandfather often used the expression, "Just the pot calling the kettle black."

I really loved the guy.