St. Petersburg noise ordinance and the problem it created

According to the city’s last noise ordinance revision, the downtown bar scene is the issue. But, it is not.

The St. Petersburg noise ordinance had been altered in 2000 to incorporate low frequency bass thumping. Then again in 2008 focusing on the distance sound travels and what are acceptable times for noise. In 2016, City Council updated the noise ordinance to address downtown noise issues. When an ordinance is revised, the expectation would be to fix the issue. However, Mayor Kriseman, City Council and Police do not have a solid understanding of the noise calls and how it is impacting residents throughout the city.

According to the city’s last noise ordinance revision, the downtown bar scene is the issue. But, it is not. The problem is citywide. Had the city analyzed the police call logs, which are in a database, the problem would have found the problem to be a high number of repeat offenders. In fact, there were no noise citations issued from 2009-2016 for repeat business and residential offenders. Hence, the number of noise citations for businesses and residences before and after the 2016 revision are the same, zero.

An examination of the police call logs, obtained through a public records request, found that calls can be categorized as business (bars, clubs, entertainment complexes, restaurants and stores), residence, individuals and intersections. In 2016, the #1 and #2 noise calls were not for downtown bars. They belonged to the Flamingo Resort in the Skyway Marina District and Hollywood Nights South in South St. Pete. 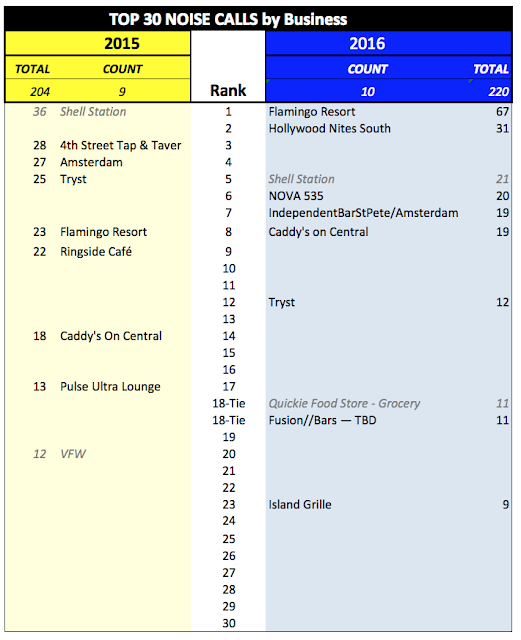 On March 29, the City held its 2nd Public Noise Ordinance meeting. I learned, some residents have been working on and off with police and or city for two to five years. Some attended to let the city know they have an issue and how the police response has not deterred repeat offenders. Some have been asking for five years. Residences were asking for help and the city had been ignoring them.

In the meeting, residents from downtown and the neighborhoods continued to share their “noise horror” stories. Several businesses attended. One shared that they had done to try and reduce the air conditioning noise, but complaints continued.

In the presentation, the City was asked how many noise citations were issued. They city responded, they did not know. In response, I shared that from 2009 to 2016, residents called the police to report noise 27,638 times. Yet the police issued ZERO citations to businesses and residents. Sixteen citations were issued to individuals for unlawful motor vehicle noise, traffic safety-horns/warning devices unreasonably loud, and unlawful operation of radio/sound-making devices or instruments.

The Hyatt Hotel representative attended. He said the downtown bar noise issue was so severe, the CEO came very close to pulling out of downtown’s new marquis property, One St. Petersburg Condos. He added, the Hyatt spent over $1 million dollars in noise abatement.

Before the meeting started, a resident revealed several residents had been sued for calling the police. Attorney fees ranged from $6,000 to $15,000. The failure of the City to enforce the noise ordinance has created a hostile environment for residents. Businesses are free to intimidate residents with Cease and Desist orders and civil lawsuits.

One resident stood up and stated, it’s time for a class action lawsuit! One council member called his constituent a liar. To say the resident’s frustration level was high and the discussion heated was an understatement.

The city has created a problem where residents have no rights. As the city grows, Mayor Kriseman and City Council need to decide what kind of reputation St. Petersburg wants to have. Will the city be known as a noisy city where residents no longer want to live downtown? Will property values go down? These concerns were expressed in the meeting.

Business owners say a balance must be struck. One argued that businesses pay more in taxes than residents, but there is no data to support that statement. There are a good number of residents within 1000-2000’ who are impacted by a bar or restaurant’s noise. I suspect the cost analysis may prove the businesses wrong. The data suggests noise calls are not the only problem. The bars also have non-noise and crime calls, which care 2 to 5 times the number of noise calls. What is this cost to the City?

Meanwhile, nearby cities are tightening their noise ordinance and enforcement. Bradenton Beach restaurant owner was arrested for noise levels. The manager  had been previously warned and cited. He was even told the next step was to be arrested. The manager stated in the article, “…he’s still shocked he was arrested.”

Meanwhile St. Petersburg is struggling to change the noise ordinance, and, in the interim, continues to not issue noise citations. This is a waste of taxpayer dollars to have a noise ordinance where police repeatedly respond. The police have stated to me, the city will not issue a citation to a business. Then why are the police responding?

In St. Petersburg the data analysis of the police calls logs (that I conducted) has identified the repeat businesses and residences. The bigger question is why hasn’t the City done this?

The current police approach is not deterring repeat offenders. The process where a resident repeatedly calls to report noise, and the police show up is not working. Sometimes the police ask the bar to turn down the music. Yet, no citation was issued.

From 2009-2016, police have responded to the Flamingo Resort for 180 noise calls and 859 calls for non-noise and crime related calls. The police have asked 66 times to turn down the music. How can the residents can hear it, the police ask them to turn down the music, but not cite the Flamingo Resort? On many occasions the officers have stood with me and heard the music and or subwoofer.

A few officers have told me, they do not feel the noise rises to the level for a citation to be issued where they have to defend this in court. Then there are officers who admit the cannot feel or hear the bass thumping. Several have said weapons training has damaged their hearing.

Residents have asked the businesses to turn down the music but they do not want to inconvenience their customers. If issuing citations is the only way to stop the noise, then the city can provide the number of repeat calls to support the officer's court testimony. It is time Mayor Kriseman directed the police chief to closely "manage" the repeat noise offenders.

Should you have a noise-related story to share or have a question, contact me directly via email