Listen to Six Residents Who Called Police About the Noise at the Flamingo Resort in St. Petersburg, Florida


This is article is part of a continuing series that discusses the noise issue, how I became involved, wasted tax dollars, encroaching business districts on the neighborhoods, data and trend analysis, City and Council's role, noise pollution and how this has impacted me.

City of St. Petersburg can no longer brush aside residents who call the police on businesses and residences to report an issue with noise. The 2nd Public Meeting on the noise ordinance was held on Wednesday, March 29, 2016. Residents who attended shared their story of suffering from sustained noise. The stories confirmed the noise issue was not isolated downtown. The effects of sustained audible music and low frequency sound waves are well documented. To help understand the effect on your health, listen to six residents and their pleas to the police for help.

At the meeting, when asked how many noise citations there had been, the city replied they did not know. A Public Records request produced the data. I reverse engineered multiple data sources to analyze the data. I easily saw there was an issue with repeat calls to businesses and residences. Then a Public Records request revealed there have been no citations to businesses or residences from 2009-2016. The conclusion was Mayor Kriseman and Chief Holloway are not enforcing the noise ordinance.

In 2016, City Council made changes to the noise ordinance but chose to protect the businesses over residents. A year later, residents have reached the breaking point. One proposed a class-action lawsuit. Some expressed concern for their downtown condo's resale value. Businesses have filed civil complaints against residents. Some resident live in fear to complain because the police have responded more than once. Yet, the neighbor continues to put speakers in the yard, blasting them with bass.

The Hyatt representative had a telling story that the CEO came within an inch of pulling out of the One. Opted to spend $1 million on noise abatement. The meeting indicated residents are frustrated with the City's process and progress. The meeting was met with resistance and City should be concerned.

Mayor Kriseman and Chief Holloway have an immediate noise problem that needs to be addressed. Anyone who says we are waiting on the next Noise Ordinance to enforce this is passing the buck. The buck stops with Mayor Kriseman.


Listen to six residents who live near the Flamingo Resort

The six residents have called the police to report a noise issue with the Flamingo Resort, located at 4601 34th St. If you recognize a voice, please ask them to contact me.

According to the 2016 City noise call logs, the Flamingo Resort is the #1 in call for bars, clubs and entertainment. This call audio, data and analysis for the article was submitted to Mayor Kriseman and City Council and or in a presentation to City Council. While the scope of my work has focused on the Flamingo Resort, I have expanded the scope to include the entire City.


Public Records requests are not always free. I have paid for the audio recordings, reports, file labeling and CDs. Requests for data, records and emails have varied from $1 to $5,400.


I have documented over 50 reasons why the police will not cite a business. For example: 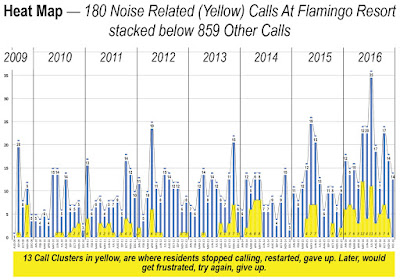 The 2016 Call For Service Reports for the Flamingo Resort address have dispatch and officer’s notes. Here is a summary:

Doesn’t an officer have to hear the music before they ask a business to turn it down?

Seems the Police have a two standards. One is a noise level for them to ask the club to turn it down, which has occurred. Then there is a second standard to cite the business, which has not occurred since 2009.

The call's audio recording is not permanently archived. According to the City's reply to a Public Records request,

Per the State of Florida General Records Schedule, the recordings only have to be maintained for a minimum of 30 days

One outcome from the 2nd Noise Ordinance Meeting was everyone there realized the noise problem is citywide, and not just downtown. I plan to continue to research the noise issue. Key findings will be published in future articles.

From 2009-2016, St. Petersburg had 27,638 calls for noise and ZERO noise violations to businesses and residences

See how a residential zoned Condo Corridor is impacted by the noise from adjacent business district.

Some of the six calls may not have come from the area identified by the orange and red push pins.

You may express your concerns and thoughts by emailing the Mayor at mayor@stpete.org, and your council member, council@stpete.org. Should you have a story to share or a question, contact me directly via email.