The New Pier a Project out of control 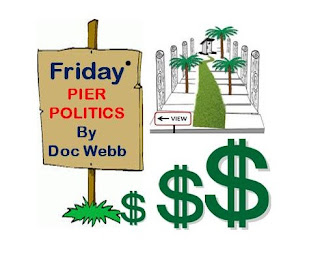 According to public records,  the City spent $4.8 million on "vendors and miscellaneous" from October of 2015 through Sept of 2016 on the Pier project.

It is time to admit that the New Pier project is completely out of control.

In fact, it is time to admit that the Kriseman administration cannot control or manage any large-scale City project or problem.

According to public records obtained by Bay Post Internet The City spent $4,873,917.39 on "vendors and miscellaneous" from October of 2015 through Sept of 2016.

Many of these vendors and consultants received multiple payments throughout the fiscal year.

That is almost $5 million dollars with little physical progress beyond tearing down the old Pier.

"I'm looking at, if we invest some more money, we can have a world-class  Pier," Kriseman said. "It's more taking the elements that would exist in the current budget and taking them up another notch."

What Kriseman is really saying is this whole project is poorly planned and completely out of control.

Millions spent on consultants and promotion only to get to the point where the City cannot begin to build what was promised.

The County Commission needs to put a stop on any more public funds going into what is becoming a consultant's enrichment project.

This not the end.

Once construction starts, if it ever does, there will be change orders, scope creep and "undiscovered problems" that will continue to drive the cost up.

Just the fact that City Engineering department is managing the project should be cause for significant concern.

Kriseman and his team just do not have the ability to manage these large-scale projects.

They spend way to much time painting a pretty picture,  We Are Going To Build a Pier, and not enough time with their nose in the details.