The really biggest loser in the Presidential Election 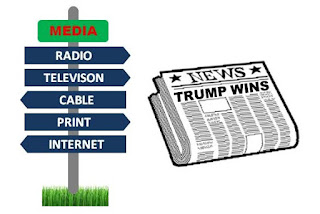 No, it was not Hillary Clinton, the Democrats, women, African Americans or Hispanics.

To say Tuesday's election came as a shock to the media, political pundits, the news networks and most people in the political "know" is a wild understatement.

Once the media discovered that Trump had figured them out and was using the media to beat the political establishment at their own game, they became indignant. They openly complained about Trump "driving the news cycle" but could not bring themselves to drop their coverage.

While complaining about the Trump tactics, they became unwitting accomplices incapable of managing their business to their own stated journalistic ethics, which, by the way, they finally threw out the window.

Then came the debates as one network after the other put forth their star-power news readers to capture the pelt of Trump and hang it on the news room wall.

Each moderator went down in flames often getting more criticism than the candidates did for their debate performance.

The noticeable exception was Chris Wallace from Fox news, who most people felt did a good job.

In the next presidential debate, the Committee on Presidential Debates should consider rejecting the idea of "News Star-power moderators" and instead recruit significantly skilled academics to moderate the presidential debates. People whose careers are not enhanced by making one candidate look bad or another look good.

Chief among the media despots was taxpayer supported NPR National Public Radio and their highly motivated radio and TV affiliates who were so far left leaning and anti Trump it was at times more comedy than reporting. They tore up their "fair and balanced" mantra in a stream of self-righteousness that tarred the anti Clinton forces with every conceivable brush.

Nothing was more comical than watching NPR News anchors anguish every time they had to deliver a Trump story, especially if was positive.

Next time the solicitation for donations letter for your local NPR affiliate shows up in the mail, you might want to consider sending the money to the SPCA where it can do some real good.

The point simply is the media stopped reporting the news and tired to become our collective moral conscience and project on us the views of their star power moderators, pundits, political writers, commentators and news "managers" without admitting they were doing it.

There is an old adage "Don't try to save them from themselves, they don't appreciate it."

We didn't, we elected Trump.

I am not sure, which is worse, misogyny or moralism, but the voters appear to have ignored the withering stream of media diatribe designed to pull Trump into the gutter and defeat him.

The sad result of this over extension of the role of the media, print, broadcast and cable is serious damage to the credibility of the news media to perform their basic role in our society of informing the public.

Managing the public's opinion goes on the editorial page or designated as "opinion" or "commentary" but in this election cycle, it was in almost every story.

This drop in credibility of the media is sure to only worsen the fate of print media in this country, cause all Americans to view the broadcast and cable news networks with skepticism.

The real looser in this election was the Fourth Estate that we used to trust for our window into all things political.

As a society we can longer continue to impute to those who say they are "fair and balanced" that there is even a modicum of truth to that statement.