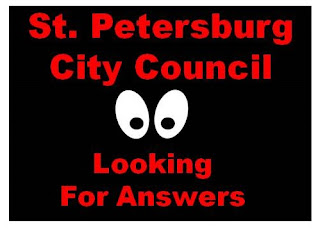 City Councils have always been manipulated by the administration.

The elected body, City Council, is just now beginning to deal with the effects of a strong mayor who has politicized all most all aspects of the City Government.

The current problems between Mayor Kriseman and the City Council began almost immediately after his election. See my post Bay Post Internet Transparency - No So Much

Steve Kornell via Twitter:
Update on sewage issues and what is happening in our local government. Recently it was revealed that a previous study recommended keeping the Albert Whitted Plant open, but this was not shared with the St. Petersburg City Council. Emails also showed a cozy relationship between the consultants and our staff. So, as a common sense solution, I suggested adding boiler plate language into our consultants' contract stating that all consultant studies, drafts and technical memorandums are emailed to city council at the same time they are submitted to staff and administration. This involves adding some standard language to all our contracts and adding 9 people to an email distribution list. It's common sense oversight, while at the same time it does not bog down staff in overzealous requests for information. To my surprise, Mayor Kriseman and the City Administrator questioned this move. I was even more surprised by the fact that one of my City Council colleagues voted against this common sense provision that provides basic oversight before spending millions of your dollars on these consultants. I just though you should know - but don't take my word for it - view the video from the November 3rd City Council meeting. I believe every level of government should be as transparent as possible.

The issue here is the Kriseman administration does not want City Council to have any information that has not been filtered.

The Kriseman team is refining this information management approach to an art.

There is something to be said for assuring the final consultant report sent to City council has met the requirements and specifications of the contract, but beyond that the final report should be provided to City Council from the consultant not the administration to ensure that the information gets to the publics' representatives.