Kriseman on the Crap 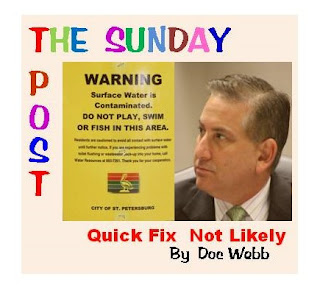 St. Pete's Mayor has unveiled his plan to rescue the City from a near tidal wave of sewage flowing through the streets and into the Bay.

Kriseman's latest sewer epistle is a significant deviation from the recent past.

"That is a change of direction that I am grappling with right now," said council member Darden Rice.

Council member Ed Montanari said he was concerned that the city has decided not to reopen the plant.

Council member Steve Kornell pressed Tankersley over his assertion that the city would have still dumped or spilled millions of gallons of sewage even if Albert Whitted had remained open this whole time.

Council member Jim Kennedy said he was concerned that the city would be as vulnerable next summer as it was this past summer.

Key in Kriseman's $15 million quick-fix plan is relining so-called "leaky" pipes that allow millions of gallons of water to flow to the plants in rain events.

When the City Water department and City Engineering are involved, there is no such thing as "quick." The word is simply not in their lexicon.

If the consultant that said about two-thirds of the City's sewage flow on a normal day is from incursion leaking is accurate, a really big question City Council should ask is during a rain event where will those millions of gallons of storm water that cannot "leak" into the sewer pipes go?

One would assume it would pile up in the streets causing a disaster of epic proportions.

The other facet of Kriseman's plan is to increase storage capacity by adding 45 million gallons at two of the City treatment plants. Given how long it has taken to build the tank at southwest this will be anything but a "quick" fix.

And of course the first step is to hire yet another consultant for $3.5 Million to develop a "master plan" due in 2019. I am sure all the usual consultants are already lining up to be part of the City's questionable CNA process.

All of this points out that Mayor Kriseman, and his dream team are not very good at governing. The million-dollar office of the Mayor is good at spinning, pointing fingers, and blaming but not very good when the chips are down or in this case when the level is up.

"Mayor Poopy Pants," see Tampa Bay Times, Daniel Ruth: Drip, drip, drip goes St. Petersburg's sewer mess, has a serious long range problem on his hands, and he is not providing much leadership toward a solution.

I wonder how Mayor Poopy Pants will look on a campaign poster?