The Kriseman Administration a crisis of incompetency – Part 1 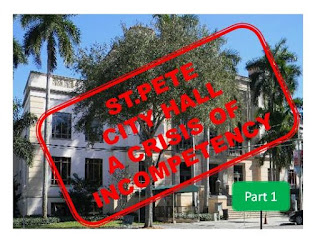 The seeds of incompetency were sown almost immediately upon Rick Kriseman's election.

This Part 1 of a three-part series focusing on the competency of St. Petersburg Mayor Rick Kriseman and his Office of the Mayor.

It would be easy for those of you new to the area to conclude that the Kriseman administration's problems dealing with St. Pete's latest sewage dump are the result of a single incident going out of control.

The seeds of incompetency were sown almost immediately upon Rick Kriseman's election. His decision to develop a politically driven office of the mayor populated by his political cronies was an early indicator of problems to come.

In that conversation I asked, "How would you govern differently than the current administration?” “The best leaders are those who recognize their shortcomings and surround themselves with people who compensate for those short comings," Rick replied.

When I asked, "What would you do differently than the current administration?” Kriseman replied, “I would have better communication with both staff and Council. It seems the staff has no firm direction. They don’t know where the City is headed,” Rick replied.

All it took was a successful election for Kriseman to forget his direction. But then the recent past has borne out the fact that mayors like to tell people what they want to hear.

Immediately following his election Kriseman moved to create his expensive office of the Mayor, which has bumbled and stumbled its way through the first 2+ years of his administration.

My question of the Mayor's approach did not seem to set well.

Kriseman blamed a "low level" employee calling her "essentially a clerk" for an inaccurate account of the sewage spill.

It turned out the employee was much more than a "clerk." From Tampa Bay Times Mark Puente, St. Petersburg sewage spill stories remain at odds. "On Monday, Craven Askew, the wastewater official who blew the whistle on previously hidden aspects of the city's sewage crisis, said the person in question was a high-ranking employee qualified to make the call.

He wrote that the "water reclaim plant operation specialist" is a technical position, not a "clerk."

Kriseman then tried to blame an unnamed person contending someone told him the person was a clerk.

Who Ben Kirby or Kevin King?

Kriseman's treatment of this employee and his blatant attempt to cast the blame are demoralizing to all City employees.

Kriseman/King and Kirby's total disrespect for city employees from the professional staff to those out on the street serving you is poisoning what once was an outstanding public service organization.