Kriseman in a scramble needs to stop looking for a scape goat. 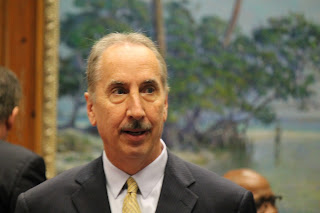 St. Petersburg Fl
Opinion by: E. Eugene Webb PhD
Author: In Search of Robin
The hallmark of the Kriseman administration has been not taking responsibility for anything negative. The level of spin and denial that consistently comes from the Mayor’s office has eroded almost all public confidence in the Mayor and his inner circle.
The Kriseman spin and blame cycle has been in effect since the day he took office.
The impact of this approach to governing was emphasized during the most-recent  sewage spill when a member of Kriseman’s City staff requested whistle blower protection to make sure he did not become the victim for revealing a report the Kriseman administration should have known about.
Just the fact he felt compelled to seek protection tells you reams about the comportment of the Mayor’s Office.
Kriseman in a desperate effort to deflect, started blaming everyone he could think of: former Mayors Rick Baker and Bill Foster, he suspended his Public Works Administrator and Engineering Director.
Now former Mayor Rick Baker has responded. From the Tampa Bay Times by Rick Baker, special to the Times Baker: Water, sewers are basic, constant city concerns.
Kriseman and his dream team like things shiny, they can brag about in Ben Kirby’s slick blogs and moderately professional U-Tube videos.
There is nothing blingy about sewer pipes, expensive waste water projects and sewage plants therefore, little interest from the Mayor’s office.
Couple that with a strong tendency against openness and transparency and we have a crisis of infrastructure and confidence.
There are a lot of people in the various city departments that want to help solve these problems. The issue is it seems they don’t trust the Kriseman administration and the Mayor’s office, and regardless of their platitudes, the Mayor’s office does not respect the staff.
The simplest method to deal with an administration that shoots the messenger is to not say anything.
Or perhaps more to the point the old adage: don’t try to save them from themselves, they don’t appreciate it.
Until Rick Kriseman and his dream team figure this out, all the city’s major projects, The Pier, the uplands, the Police station, the Rays, the purity of Tampa Bay and the public’s health and safety are all at risk.
e-mail Doc at mail to:dr.gwebb@yahoo.com send me a Facebook (Gene Webb) Friend Request, and be sure to Like or Share on Facebook.
See Doc’s Photo Gallery at Bay Post Photos
Disclosures:
Contributor: Bob Gualtieri for Pinellas County Sheriff,  Patrick Murphy for US Senate, Charlie Crist for Congress