The Kriseman Administration a crisis of incompetency – Part 2 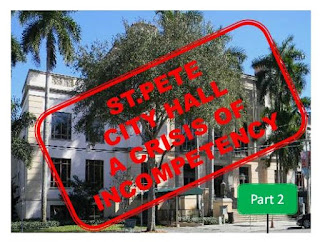 Early in September of 2016 Kriseman instituted a policy forbidding employees to talk to the media, or they could be fired.

See Part 1- The Kriseman Administration a crisis of incompetency

This is Part 2 of a three-part series focusing on the competency of St. Petersburg Mayor Rick Kriseman and his Office of the Mayor.

Early in September of 2016 Kriseman made a policy change that had Kevin King's fingerprints all over it forbidding employees to talk to the media, or they could be fired.

The real question is: how could a political leader even consider something like this when they are touting transparency? Bay Post Internet Doc Webb January 15, 2015 Kriseman Administration and Transparency

Not a lot of comfort for people living out by the North West treatment plant whose yards smell like a toilet.

This is another Kriseman effort to move the spotlight from his Office of the Mayor and put City Council in the hot seat. If City Council is smart, they will take that baton and go get the need money from Kriseman's shiny pet projects starting with the Ferry.

A municipal government is not an easy thing to manage.

As a local government gets bigger, the problems grow exponentially. One of the real problems with the strong Mayor form of government is getting a political animal elected that puts his/her or her inexperienced political cronies in operating and policy positions, and the results are what we now have in St. Petersburg.

Kriseman was never much of a politician, and he is even less as a manager and leader.

His inner circle is unqualified organizationally inept, governmentally inexperienced and incapable of embracing the City government structural culture to the point they can tap its many resources and knowledgeable people.

It is one thing to want to change an organization's culture, it something entirely different and dangerous to denigrate and ignore that culture. That is what Mayor Kriseman, and his office of the Mayor have done.

King and Kirby are genuinely disliked and not trusted by people down in the City's organizational structure, and few if any employees trust the Mayor.

The one seemingly intelligent person on Kriseman's staff, Dr. Kanika Tomalin, has yet to be given the opportunity to shine.

Kriseman has created a management environment where the workers, supervisors and managers simply hang their leaders out to dry by staying silent out of fear for their jobs.

It all comes down to this. I was with the City in a senior management position for 23 years and the Police Department for an additional five years. During that time, I have no recollection of anyone with bad news requesting whistle blower protection from any administration either strong Mayor or during the City Manager form of government.

I had to deliver my share of really bad news, some of it very costly, and I never felt that my job was threatened.

There is a much bigger issue here than the recent sewage spill and the way the Kriseman team reacted.

Also on the burner are the Pier, the Uplands, a new police building and whatever project Kriseman can come up with the fix the aging water and wastewater infrastructure.

Given what has taken place over the last 2+ years, how can the City Council or the public trust, the Kriseman administration and anything they say about any of these projects?

How can you believe the Kriseman administration's reports when the staff wants whistle blower protection before they speak out?