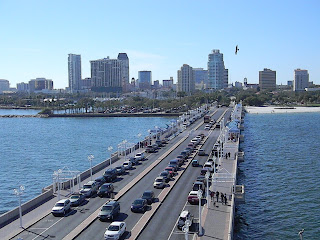 The Kriseman Administration's plans to develop the uplands around the "New" St. Pete Pier never seemed like a good concept.

St. Petersburg, Fl
Opinion by: E. Eugene Webb PhD
Author: In Search of Robin
Packing more stuff into an area that is more noted for its inherent beauty and peacefulness than the hustle and bustle of a theme park is more shortsighted than practical.
The headlong rush by the Kriseman administration to create a $20 million millennial play ground to entice more downtown development is questionable in light of the aging and insufficient downtown infrastructure to support that development.
From the Tampa Bay Times July 6, 2016 Sunday Letters
Pause on development
Virtually anyone you talk with in town or read about in the Times is against developing the uplands area of the pier. The president of the Waterfront Parks Foundation put it so well in his letter. The intention of our ancestors who established the public waterfront is clear: Keep it open and public. What part of this does the Rick Kriseman administration and City Council not understand? I am a native of St. Petersburg and try my best to help people get past their anger about how the sewage overflow problem is not front and center. If it were, a pause would be in place on any development on the waterfront.
Having participated in the numerous pier envisioning sessions, it was clear then as now that development of the uplands is not wanted. As it stands, only a relative handful of people will benefit from the present plan. The rest of us will have to look at a bunch of big structures and even a parking garage, all the while avoiding the whole area because of a stressed and dated sewage system.
Ivylyn Harrell, St. Petersburg
The whole concept of City-owned commercial space, especially for restaurants is a mistake. Check out Sylvia's in Charlie Frago's Tampa Bay Times piece; Sylvia's in Midtown St. Petersburg struggles to avoid eviction.
I have to agree. I have yet to meet anyone in favor of the uplands development that doesn't have a financial interest in the project,
If Kriseman was interested in creating a vital and vibrant downtown, he would slow down development and invest the taxpayer's money in a major overhaul of downtown water, sewer and streets along with a reconditioning of the south east water treatment plant.
While not all bright and shiny, it would be a legacy that would be remembered.
The big driver in all of this is the $20 million that unexpectedly showed up from the County. Being a good Democrat Kriseman could not resist the temptation to enhance his weak and controversial Pier decision by expanding the concept all the way to Beach Drive. Somehow this extra $20 million would make all things Pier better.
"The whole idea should be to protect and expand our water front Parks," former St. Pete Mayor Rick Baker recently told me.
I do not see how the uplands development comes close to meeting that objective.
E-mail Doc at mail to: dr.gwebb@yahoo.com or send me a Facebook (Gene Webb) Friend request. Please comment below, and be sure to Like or share on Facebook.
See Doc's Photo Gallery at Bay Post Photos.
Disclosures:
Contributor: Bob Gualtieri for Pinellas County Sheriff, Carlos Beruff for US Senate