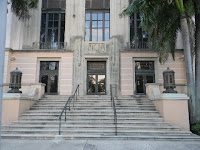 The event all set in Room 100 were sure,
All festive with banners and holiday allure.
The table all set and the chairs neatly arranged,
Somehow it all seemed surrealistically strange.


T'was to be a happy day his honor Bill had decreed,
A wonderful day and a glorious feed.
The table was laden with food galore,
Some turkey, some ham, and some crow I am sure.


The staff and the Council  arrived early for horderves and libation,
There was laughter and joy and some consternation.
They pondered the approach of the new administration,
Each considering his or her own personal situation.

It quickly turned ugly as Leslie and Jeff ,
Accused Marketing of causing the LENS ugly mess;
Of not promoting the LENS,  not properly enough,
Agreeing, Ballestra jumped in stirring the huff.

Around the room the arguments erupted,
The Pier, the LENS and those neighborhoods interrupted.
The Rays, the chase policy, the bars and downtown
The south side added to the quickly growing sound.

Blame flowed like Champaign on cool new years eve,
Everyone blaming everyone else - no leadership you see.
There were shouts, accusations  and wild speculation,
As someone heaved a pie in Mike Connors direction.

The situation escalated with a tossed twice baked potato,
Followed by the cranberry salad and some lovely sliced tomatoes.
The veggies, some rolls, followed by the turkey itself.
His honor the Mayor they were now trying to pelt.

Removing the turkey from astride his lap,
His honor arose from the head of the table where he sat.
"Let's pray and then eat on this most festive of days,"
While his head tilted sideways with a boyish gaze.

The party soon over the maintenance crew entered the room,
All littered with food and strong sense of doom.
One looked at the other and quietly said;
"I hope this guy Kriseman can do what he says."