A New Pier - Recapturing the Old 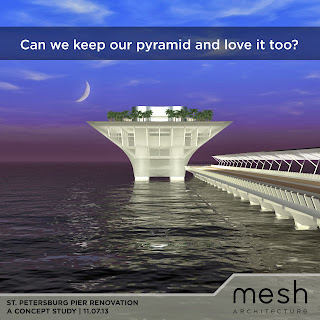 There is a new proposal for the Pier by MESH Architecture and Fabrication a local firm.


I like it. It is a really interesting idea.


Note that the approach is narrower and appears to constructed alongside the existing approach which could significantly lower demolition costs for the approach.  Very clever.


Obviously it is a bit early to begin promoting a single idea, but here is an example of how a firm with local roots, that understands its community, can make a significant contribution to the thought process. 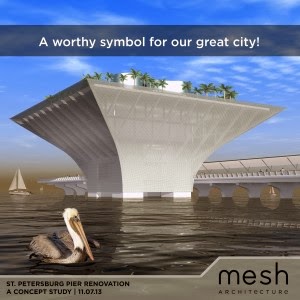 One of the problems of current and previous City Council members along with the Chamber and the arts community is they get ahead of themselves.


They also get ahead of the people that make St. Pete a great City. They get caught up in thinking we are more than we actually are.


They see St. Pete as something the people who live here are no longer worthy of being a part of. And in the end those very people through two petition drives and defeated incumbent Mayor put those who hold the people in such artistic disdain back in their place.


The message should be clear, we don't need people from Europe, California or New York to spoon feed us our new identity, we know who we are.


Those from the elite of the arts and design community who would wish to participate in the new Pier would be wise to spend some time here and not with the Chamber, the Arts Commission and not on Beach Drive.


Drive out West through a few neighborhoods, stop in a few coffee shops or small restaurants and talk to some people. Better yet go into a couple of barber shops or beauty salons.


Talk to those  who live downtown, the retired who live all over town and go to the south side and talk to those who need a Pier they can enjoy.


The MESH people apparently understand most if not all of that. Let's hope the survey results and the approach the new Mayor has laid out do not get hijacked like the Pier Task Force.


In the mean time the MESH design is really intriguing.