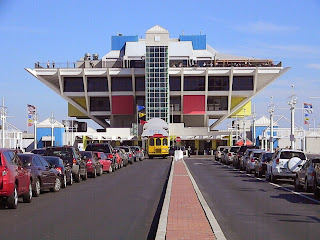 27 October 2013 by Robert Neff......Mayor Foster and the City of St. Petersburg have publicized the cost to refurbish the St. Petersburg Pier to be $70-80 million. A public records request was filed in October 2013. That document supports the Mayor Foster's figure if the Pier is renovated with the same footprint.


However, this document also shows a significantly lower cost if the bridge and pier head (Apron) are reduced. This cost is more in-line with the recent costs of the previously proposed St. Petersburg Pier called the Lens designed by Michael Maltzan Architecture.


BACKGROUND:
During the campaign for the new St. Petersburg Pier, Mayor Foster and City Council of Petersburg stated the cost to refurbish the Pier was between $70-80 million dollars. This was used to compare the new St Petersburg Pier, called the Lens. This figure became an "Apples and oranges" comparison because similar measurements were not used.


Instead the Mayor Foster and City Council of St. Petersburg compared the refurbished pier "As Is" to the Lens' narrower bridge and decreased footprint. However, there is an Apple to apples cost comparison that Mayor Foster and the City Council did not publicize. Why? You have to ask them.


If these costs were available to residents prior to the referendum, they should have been made public. If this is so, proves what many have suspected - Mayor Foster and City Council of St. Petersburg were not entirely forthcoming on the costs to renovate the St. Petersburg Pier.


You can see more of Robert Neff's analysis including a detailed financial break down at Why Mayor Foster's $79-80 Million Cost For St. Pete Pier is Misleading