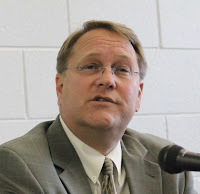 
Mayoral frontrunner Rick Kriseman, who has pledged to hire an administrator to oversee economic development in Midtown since entering the race, criticized Foster's announcement as a campaign stunt fourteen days before an election.


"Mr. Foster waited nearly 1,000 days to appoint a new liaison to Midtown," said Kriseman. "Announcing this position two weeks before an election is offensive and nothing more than an act of desperation from a mayor trying anything to hold on to power."


Stunt or not, the fact is Bill Foster completely turned his back on the South side of St. Pete after he was elected.


St. Pete needs a mayor for the whole community, not just down town.