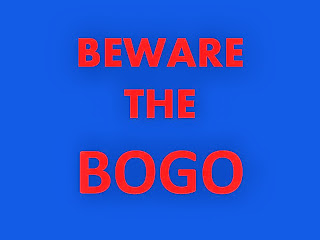 Buy one get one free is the hot advertising pitch for local grocery stores.


Wikipedia defines BOGO as: "Buy one, get one free", or "Buy one, get one" is a common form of sales promotion. While rarely presented to customers in acronym form, this marketing technique is universally known in the marketing industry by the acronyms BOGO and BOGOF,[1] and it is regarded as one of the most effective forms of special offers for goods.


"Economist Alex Tabarrok has argued that the success of this promotion lies in the fact that the price actually takes into account the fact that two items are being sold. The price of "one" is somewhat nominal and is typically raised when used as part of a buy one get one free deal. Whilst the cost per item is proportionately cheaper than if bought on its own, it is not actually half price."


There are really two questions you should ask when making a BOGO decision.


The second and often more important question is: if you buy the BOGO and get two packages of the item, can you and your family use up both packages before they go out of date or stale?


If you buy the BOGO and end up throwing even a small portion of the product away you have really lost money.


If you have a large family, BOGOs may work, but as a wise man once said "there is no free lunch." The true objective of the BOGO is to get you to spend more money not provide significant value.


This Halloween season beware the BOGO it most often more trick than treat.