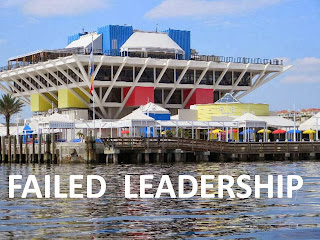 After almost 25 debates and forums with questions ranging from public bathrooms to the police chief, it is easy to over look the impact of Bill Foster's inability to lead.

The Poster for this administrations' lack of leadership is the Pier. From the beginning of the effort, Mayor Foster capitulated his leadership role.
He failed to follow through with support for the Pier Task Force.
He caved in to the arts community and the Beach Drive special interests as they pushed for a non competitive non functional Pier.
Foster's lack of specific leadership on the Pier created a power vacuum which City council sought to fill.
Foster stood by and let special interests drive the City Council to an elitist approach to the Pier design and selection.

Foster failed to respond when the public began to complain about the selection process.

Foster failed to provide any leadership as the first petition drive started. First he was against it, then for it, then neutral, then for it.

Foster and his administration's lack of  assistance to the first petition group essentially allowed  the first petition to fail.
The second petition drive, better funded and featuring very prominent St. Pete citizens provided its own leadership with little support from the administration.
Foster's rush to close the Pier and demolish it was an attempt similar to the Lacy house bulldozing to simply make the problem disappear.
There is no good reason to vote for Bill Foster for a second term. There is no indication in his campaign that he will do anything different. In fact a frequent quote from the mayor at campaign events is 'I am going to keep doing what I have been doing".
The Pier says it all. Closed, 400 people out of work, no public access, refusal to show any concern or regard for those put out of work, or those that would like to have the Pier reopened until construction starts.
Can you really in good conscious, regardless of your Party preferences, vote for four more years of staff chaos, failed leadership and general disregard for the public's desires?
We will have a new City Council following this election with fresh ideas and new opportunities. Let's provide them with the leadership they and the administration need to begin a new approach in St. Petersburg; where the people, the neighborhoods and City Hall work together for the common good.
Rick Kriseman can make that happen.
Be sure to comment below or you can e-mail Doc at: dr.webb@verizon.net, or send me a Facebook Friend request.
Campaign Disclosures: Contributor to Kathleen Ford Campaign, Darden Rice Campaign, Concern Citizens of St. Petersburg, Rick Kriseman for Mayor, District 2 Lorraine Margeson