A Casual Conversation with Ken Welch 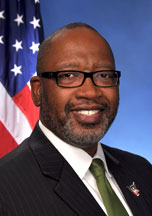 County Commissioner Welch and I met at KAWA Coffee Shop South, for a brief conversation on Monday Feb 25, 2013.

Commissioner Welch was born in St. Petersburg and attended local public schools, graduating from Lakewood Senior High School. He holds a B.A. degree in Accounting from the University of South Florida, and a Master’s Degree in Business Administration from Florida A&M University.
Commissioner Welch’s professional work experience includes 14 years in Accounting, Information Technology, and Financial Systems Administration with Florida Power Corporation (now Progress Energy).
If you have never had the opportunity to meet Ken Welch, he is a charming and articulate man. He comes from a St. Pete family that has long dedicated itself to public service. If you ever have the chance, be sure to step up and introduce yourself.
My first question: “How do you think things are going in St. Pete and the County?"
Ken replied, “there are a lot of issues in both St. Pete and the County, but my perception is we are doing pretty well." "We have weathered the economic downturn and things are looking better."
Ken Welch was on the final Jury that selected the LENS as the County representative. “Do you think the City should have held a referendum on the Pier,” I asked.
“The process virtually led us to the outcome,” Ken replied. "There were strong feelings about the various proposals, and the LENS was the most likely outcome from the beginning.” Ken continued, “I did recommend that a public hearing be held before the final decision.”
"Do you think things are better for people who live on the South side of St. Pete than they were under the Baker administration?” I asked.
"No, but not necessarily related to the Foster administration," Ken Replied. “Twelve percent of the County population is at or below the poverty level and 45% of those live in just 5 areas of the County, one of the major areas being South St. Pete." Ken continued, "I think the significant issues are lack of jobs, and education.” "Without an education, finding work is difficult and crime naturally grows in that environment."
"Are you comfortable with the way crime is addressed in South St. Pete?” I asked.
"I think we need a more holistic approach,” Ken replied. “We have to address the poverty and education issues before any substantial improvement will occur."
"What do you see as the number one problem facing ST. Pete and the County?” I asked.
Ken had a short but powerful list. "Homelessness, EMS, the Pier, the Rays and crime,” Ken continued, "it's imperative that the County and the City work on these issues together.”
"What would you consider the most important vote or issues you have addressed while a County Commissioner?” I asked.
"Housing, Juvenile Welfare Board, and homelessness,” Welch quickly replied.
"Now that you have withdrawn your name from consideration by the JWB, are you likely to consider running for St. Pete Mayor in the upcoming election?" I asked.

“No”, Ken replied. “For several reasons." "First, I said if I was reelected to the County Commission, I would serve out the term." " Second, if I were to resign and run for St. Pete Mayor, it would create a political appointment opportunity that might not be in the County’s best interest on several key issues.” "Finally, I have a lot of respect for Rick Kriseman and I think he is a good candidate."
"However,"  Ken continued, "I have long said that a St. Pete Mayor’s bid in 2017 is not out of the question."
I hope he follows through on that Mayors' bid. I likely won't be around to write about it, but should Ken Welch be successful in his 2017 Mayors' race, St. Pete will be the big winner.
You might also find these Posts of Interest:
A Casual Conversation with Rick Baker
A Casual Conversation with Herb Polson
Is Rick Baker Really Out of The Mayor's Race
A Casual Conversation With Rick Kriseman.
e-mail Doc at: dr.webb@verizon.net, or send me a Facebook Friend request.