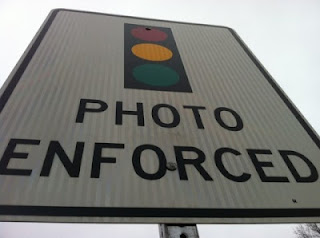 Mayor Foster's decision to exempt red light camera citations where the car owner submits an affidavit stating they were not the driver will likely create a significant number of such affidavits.

Since most people view the whole red light camera program as nothing but a government revenue scam, it is possible that they may opt for the affidavit as an easy out.
This could make the Clerk of the Circuit Court, Ken Burke's job even more difficult.
Watch for the red light camera companies, American Traffic Solutions in the City's instance, to begin utilizing those red light cameras to get a picture of the DRIVER.
Next question will be does this constitute and illegal search?
Bigger question is why not just put the whole program on  hold until the State and the County figure things out?
Why not treat everyone fairly and wait until the law is clear?
Answer MONEY. I was in some of the meetings with ATS when they sold the City this program. It was a money scam wrapped neatly in a cloak of traffic safety. You could tell by all the grins when the subject of money came up. Some of the most disgusting meetings I sat in my 25 plus years on City Staff. And that is saying a lot.
Enterprising attorneys will soon figure a way to write the affidavit and people are being forced to consider taking a potential  illegal action to avoid  paying for program of questionable legal status and limited public safety impact.
All of this makes great headlines during campaign season, but in reality the Mayor has simply made the whole issue even more distasteful.
Another example of timid leadership.
We can only hope something good regarding red light cameras might happen in the Legislature, but with  millions of dollars flowing through the doors of red light camera companies ever month they have a lot of money to spread around.
You know what they say about Tallahassee, it's the best government money can buy.
e-mail Doc at: dr.webb@verizon.net, or send me a Facebook Friend request.