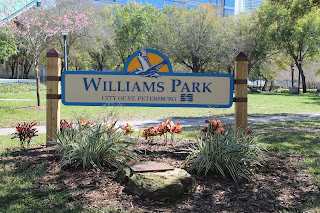 Stephen Nohlgren has a very interesting article, "Tropicana Field: The next big urban mixed use development?" in  Saturdays' Tampa Bay Times. Nohlgren puts forth some significant points regarding redevelopment of the Tropicana parcel.

Greg Sher, former CEO with the Sembler Company, is quoted in the article as suggesting putting together a group from the academic, scientific and medical community along with community leaders  to begin to develop a plan for the Tropicana parcel.
In a previous Post, Williams Park - Some Solutions to Think About , I suggested maybe it is time to consider redeveloping Williams Park and using it for the City's new Public Safety Headquarters. That would fit nicely with Nohlgren's idea by adding a couple of adjacent large parcels to the Tropicana site for commercial or residential development.
I can't think of anything that would shore up the concerns about the downtown core more than replacing Williams Park with the Public Safety Head Quarters.
Maybe one of the existing PD Parcels could become the transportation hub with a trolley feeder into downtown.
Granted, it may not be the best operational location for the PD, but the current proposed location is just about 10 blocks West and it is really not that great either.
It is not too late to have the Public Safety Complex architect take a look at Williams Park as a potential location, as long as his look is to find out IF it will work, not all the reasons why it won't.
I also like Sher's view of the Rays. "The Rays will probably move to Tampa at some point",  Sher said.  "Let's not cry over that." " Let's mourn for five seconds and figure out how to move forward."
It is way past time that City Hall got over baseball and started planning how to make ST. Pete a great place to live and work.  It just could be if we took our eye off the baseball and put it on what is working, a safe, clean, vibrant downtown area with lots of opportunity to grow, things would really start to happen in St. Pete.
Too many local politicians and especially this Mayor pay way to much homage to the Major League baseball God.
Baseball leaving could just be the best thing that ever happened to St. Pete.
Go Rays!   No really, GO!
e-mail Doc at: dr.webb@verizon.net, or send me a Facebook Friend request.