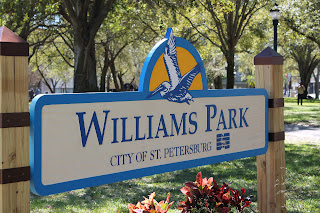 If you missed my Post  Williams Park ...Time for A Referendum? you might want to take a look at the Post and especially the Comments. Thanks to each of you who took the time to comment. Let's keep the dialog going.

As to be expected,  the "preserve the Parks at all costs" folks are up in arms at even the suggestion of a change at Williams Park, but here is the issue.

Several police chiefs have tried to solve the problem and probably the most intelligent comment I ever heard made by a police Chief about Williams Park was made by Chuck Harmon when he said, "we cannot incarcerate are way out of this problem".
The legacy of Williams Park over the last three or four decades has been set by legacy of the very people who populate it today. More and more it is becoming clear you cannot legislate, incarcerate or motivate people to give up something that has become part of THEIR culture.
The homeless, the addicted, the frail,  the addled go to Williams Park because it is their hub. It is their gathering place. It is where they feel comfortable, accepted and not alone. It has become the center of their world.
The average person who lives in St. Petersburg does not congregate at Williams Park. Williams Park is not the place people go on Saturday or Sunday for a Picnic. The local politicians rarely make their announcements at Williams Park. There is no picture of Williams Park in the City's slick advertising material.
Those who would hold out Williams Park as the central hub for St. Petersburg are simply out of touch with reality.
In fact a good question for our friends over at St. Pete Polls would be "What's the name of the park in downtown St. Petersburg? Give three choices.
Maybe commercial development is to big a reach, but no amount of feeding programs, social workers, cops, paint, programs, villages or bus tickets out of town will change what Williams Park has become. And the downtown core and the current 4 block renaissance will not grow much larger until something changes at Williams Park.
One of the commenters mentioned the original Doc Webb, (Webb's City) we are not related, but share a similar family history as my family was also in the retail business.(Not nearly as successful as Webb's City).  I studied Doc Webb when I came to St. Pete. He was a master merchandiser.
Open of the interesting things about Webb's City and Doc's approach is when they tried something and it didn't work, they tried something new.
Three different Mayors, all reasonably intelligent, have struggled with the Williams Park issue and we are basically where we started.
It's simply time for a dialog with new ideas.
e-mail Doc at: dr.webb@verizon.net, or send me a Facebook Friend request.