Williams Park.... Time for A Referendum? 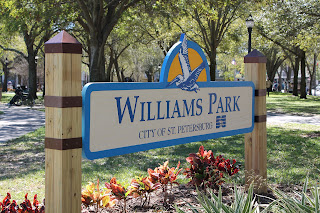 There are a couple of very interesting and well written articles in the Tampa Bay Times about Williams Park. In Williams Park 'Spice' addicts Overwhelm Idyllic Setting and What Can Be Done to Fix Williams Park, by Jon Woodrow Cox.

They are worth a read for both content and form.
Williams Park, as Cox points out, has been a significant problem for down town workers, business owners, City Hall and law enforcement for years.
I was working at the St. Pete PD when the current Ordinance and Policing plan for Williams Park was put together and it was a difficult process trying to protect individual rights, get people the help they need and improve the Park, It has been successful to a point.
The problem is and was recognized at the time, the base members of the homeless population simply don't want a different life or life style, and no amount of help, support or incarceration is likely to change that.
The two officers mentioned in Cox's pieces, Taylor and Kenyon,  have done some really good work, but if you have ever tried to help someone who just doesn't want to be helped multiply that by about 1 million and you an idea of what these two face every day.
The basic problem with Williams Park is that it is simply there, right in the heart of the City  a major transportation hub, surrounded by a bunch of well meaning homeless support efforts which in the final analysis probably do more to encourage the problems than mitigate them.
The City Charter does a wonderful job of protecting the City's park land from encroachment by developers, but maybe, just maybe, the time has come to take a second look at Williams Park.
Now might be a good time to put together a citizen and staff group to look at crafting referendum language that would remove almost all of Williams Park from park land status and rezone it for development. A reasonable but small portion could be retained as park land for relocation of the numerous meaningful monuments in the park, a task paid for by those who would develop the land.

It could be that the assignment of the servitude for Williams Park precludes such an approach but if it does not, putting the question of resolving the Williams Park issues to the public and establishing a way to accomplish them while providing for control of the development could be a real step to solving the problem.
It seems unlikely that the core of the City will develop to any great extent as long as the issues so well defined in John Cox's articles continue to exist. And it would also seem that most reasonable people after looking at the extraordinary efforts the City has made to address the problem would agree.
If an effort like this were undertaken, keeping those who might benefit most at bay for the moment, the public could weigh in at the ballot box and just possibly provide a path to resolving the Williams Park problem once and for all.
e-mail Doc at: dr.webb@verizon.net, or send me a Facebook Friend request.