Williams Park -- Some Solutions to Think About 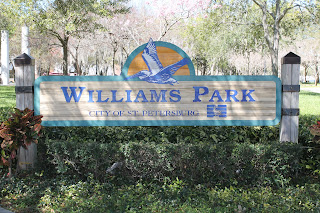 My Posts Williams Park -- Time for A Referendum and Williams Park What's Really Wrong?  produced a lot of Comments, e-mails and a few calls.

Here is a synopsis of the Comments  and some thoughts from the e-mails and conversations.

As to be expected, not very many people were enthused about my redevelopment idea for the park. In fact several took me seriously to task for even suggesting it. I am not hurt but seriously wounded.
Several people felt the moving of the bus hub would help eliminate the problems, but offered no reason as to why. Although one indicated all of that diesel smoke may be partially to blame for some of the problems.
There was a suggestion that we look to some other Cities who have successfully dealt with this or a similar problem. Actually the City has done that and so far the ideas have had only mixed results.
There was a thought that if we make Williams Park uninhabitable for the current occupants they might just move to the LENS once it is built. It might then become nick named  the "Spice Trail"
The street car/transportation hub with routes to the Pier(LENS) and a regional transit center seemed like a good idea.
There was a suggestion the City close the Park, renovate and then open with an aggressive program schedule to attract citizens to the Park.
My favorite was the skate park suggestion which I think has real merit. It would be a really big skate park.
So here are some other ideas:
·         Put the new Police Building on the site and take all of land at the PD make some a park and develop the rest.
·         Build a new combination Municipal building, City Hall and parking garage on the site. The new government Center theory. Currently no money at all for that one.
·         Give the Park to the County and hold them responsible.
·         Build a very nice house in one corner of the Park and require that the Mayor and his family live there as a condition for holding office.
·         A downtown Wal-Mart.
·         NBA Basketball arena so we will still be a big league sports town.
But my favorite Comment so far was the story of the Chinese Village. A comment on the second Post above. Therein lies the real message.
What is interesting is that all of you who took the time to comment or e-mail seem to recognize there is a serious problem that needs to be addressed.
There is a lot of residential development starting up in the downtown area. These people are going to want more than Beach Drive. For the renaissance to continue, the Williams Park issue must be resolved.
You probably have a few ideas. No matter how wacky,  login and leave them in a comment or send me an e-mail.
e-mail Doc at: dr.webb@verizon.net, or send me a Facebook Friend request.


Have your say.  Be sure to get a petition for the Pier Referendum and complete it properly. Information and schedule of events at Stop The Lens.