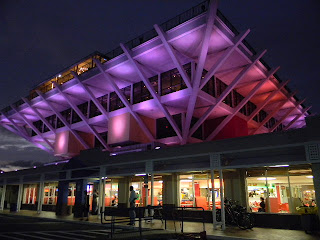 I noted with interest the announcement Thursday by a beaming Mayor of the quietly negotiated deal with the Columbia Restaurant Chain for the new anchor spot in the HUB.

Indications are the City will put up $500,000 with the Columbia folks putting up the rest. The lease deal is for 10 years which avoids the waterfront lease issue requiring a referendum, but does include a buyout clause where by the City has to buy out the Columbia if the lease fails to renew. In business I think they call that a poison pill.
On the surface seems like a pretty good deal, the Columbia folks are a class act, the whole food service issue is wrapped up, they also get the small food service area out on the LENS. Nice package.
It seems like the this whole deal was done under the covers. There was no announcement, no solicitation, no bidding process, no opportunity for another even larger provider to make an offer that might lower the City's cash out lay.
No opportunity for public input, even the arts folks seem to have been left out.
I wonder how the  restaurant folks on Beach Drive feel about no opportunity for some input or a chance to bid?
Once again the Foster administration prefers to operate as a lone wolf, in a rush to tie up as many deals as possible to prevent anything from stopping the LENS.
It might also be a good idea to keep any eye on where the campaign contributions come from.
It would just seem to me that given the continuing public outcry about the LENS process, Mayor Foster would want to be a little more transparent in the dealings with this project.
The City has a very good procurement process that works extremely well. It provides equal opportunity and transparency in the City's procurements. It's just a shame the Administration chose not to use it.
But then following the rules has not been a big concern on the LENS project.
Have your say.  Be sure to get a petition for the Pier Referendum and complete it properly. Information and schedule of events at Stop The Lens.
e-mail Doc at: dr.webb@verizon.net, or send me a Facebook Friend request.