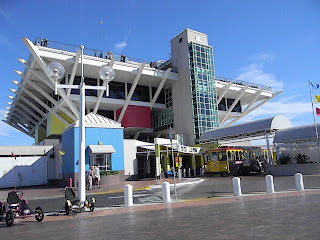 Actually I doubt if anybody in St. Pete was surprised that the mediation on Pier/LENS Ballot language failed.

What is surprising is the City deciding to let a judge have the final say. Not a normal City Legal approach. I guess the plan must be to appeal if they lose, keep appealing and finally settle a day or so after the LENS dedication ceremony.
The appalling part of this whole fiasco is the little regard everyone from the Mayor's Office, City Council and the Legal department has for the public they so often plead they serve.
There is no service here, no respect for the public, no regard for a democratic process only the desire to use whatever means are possible to go forward with something the people who are paying for don't want.
I often wonder how the Mayor, The City attorney, and seven of the 8 elected council members sleep at night. All of this talk about loving the City, while they turn their backs on the very people who are the City.
It would seem there was no intent to negotiate in good faith, no intent to "work out the ballot language" I think it would be nice if the Judge held the City in contempt for failing to negotiate in good faith an and found for the plaintiffs in all counts. Not likely to happen.
But the City will just keep appealing anyhow.
The City's tactics are clear, delay and deflect. Get the process for the LENS so far down the road it cannot be stopped.
And it's working.
It seems at this point that the Stop The LENS petition drive is more important now that ever.
The Stop the LENS petition process is not complicated but it is a bit convoluted. To be a legal petition, it must be signed in front of a witness. That means you have to make an extra effort to get your petition accepted. You have to go to a designated location to get and sign the petition in front of a witness. Click on the link for more information.
Some have been reluctant to sign the Stop The Lens Petition, after the lawsuit issue with Save the Pier petition signers.
This one is different. There will be no lawsuit. The City is already on record saying this petition meets all of the City Charter requirements and City Council must take action.
St. Pete used to be a really well run City. What the people wanted was respected. The Neighborhood Associations were respected and encouraged, There was leadership in the Mayor's Office and on City Council, Public Forum was serious business and peoples voice could be heard.
That's all gone now thanks to a lackluster Mayor, a City Council that views its self as representing the artful, powerful, and the privileged as opposed to the people.
I think it's a sad day, when the City Leadership will not direct their legal representatives to negotiate in good faith with those who represent the people so their voice can be heard.
But these days, its "Just another sad day in St. Petersburg".
Have your say.  Be sure to get a petition for the Pier Referendum and complete it properly. Information and schedule of events at Stop The Lens.