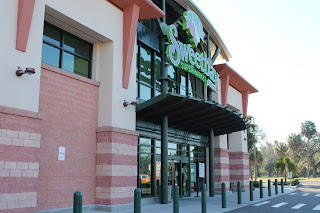 It was a long shot from the start. everyone in the Baker administration new the Grocery store anchor in the Tangerine Plaza would be a struggle.
Just getting the shopping center constructed had been a major task. It took a special developer, a lot of support and a lot of courage to go forward.
The City did all it could. There were special police patrols, city promotion, and lot of praise for SweetBay. But in the end it simply did not work.
The community never really rallied around the store. Wal-Mart opened a Super Center  within driving distance and that left only those with limited transportation options to support the SweetBay.
It was a challenging location, moderately safe in the daytime, a serious challenge at night.
Early last year the SweetBay people met with Mayor Foster about the performance of the store, and for some reason he either just blew them off or forgot the meeting. Regardless, the City did not take any proactive action to help, and that probably added to the decision to close the store.
Foster has not really paid that much attention to Midtown or the South side since the election. Odd given the fact that it was the South side vote that put him in the Mayor's seat.
What all of this really shows along with the Thursday Council meeting melt down is Foster's lack of a grasp on how the City should be run.
It would be tempting to say the Foster administration has performed badly in the first three years, but when you look at the facts pretty much the same people are in the Foster Administration that were in the Baker administration.
With the notable exception of Goliath Davis, the faces are pretty much the same.
So why is it that this same crowd of people lead by Rick Baker accomplished so much and under Foster they have been significantly less effective?
You could blame the economy, the City Council or a host of other things, but what it boils down to is even really good people without leadership have a difficult time getting things done.
Since the day Bill Foster took office there has been no clear direction. Baker had the Baker plan, four simple points. Foster has the Foster Forty, reconfigured but never really applied to the organization.
Under Baker you knew what your job was, under Foster everyone is sort of doing their own thing.
Foster has been called "the chicken soup of  St. Petersburg Politics", but it looks like the chickens may be coming home to roost.
SweetBay is a notable loss, especially in light of the Mayor's failure to act when he knew there was a problem, the Rays and Baseball get messier every day, and while the Pier/LENS issue is still up in the air the chances are getting better and better there will be a vote.
The South side of town is still in a mess, the neighborhood associations have all but been killed off and City Council is in near revolt.
Not a great story for three years of effort.
The City of St. Petersburg has gone from a shining light to a flickering flame.