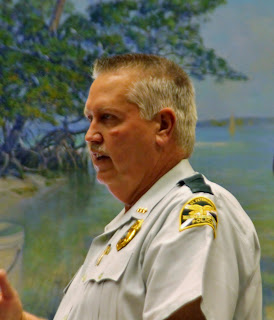 At Thursdays City Council meeting Police Chief Chuck Harmon gave the normal run down of reports and crime statistics. Crime is down. Then he made a bit of a startling announcement.


The St. Pete PD, which has long had a Facebook and Twitter account that were mostly for show and not much substance, was going to use the Twitter account to inform citizens of current police activity.
In a world increasingly dominated by social media, you might think what's the big deal, but for this Police Chief this is a major move.
For the 5 years I managed the PD IT operation we slowly pushed for more access to police information. The Chief, mostly supportive, was very cautious. Some in the Community took this as a reluctance to share police information, but that was, for the most part, never really the issue.
The issue was the Chief's very legitimate concern about how instant information access might affect the Department's ability to police the community and officer safety.
Now, with almost 5 years experience with CRIME REPORTS, a system posting police incidents directly from the police information data base, the Chief has more confidence and more knowledge about how online information affects operations and public input.
Data on CRIME REPORTS is delayed about 4 hours, so when a bunch of St. Pete Police cruisers show up in your neighborhood, you cannot find out what is going on by checking CRIME REPORTS, and if no report is taken or the report is delayed it may be some time before the incident shows up on the CRIME REPORTS map.
That's where Twitter comes in. You can now follow current police activity like homicides, bank robberies, shootings, major traffic accidents at @stpetepd.
Don't expect to find a TWEET every time you see a police cruiser drive through the neighborhood.
Posting will be done from the Police Department Communications Center. Expect it to be pretty general, not a lot of detail, especially in the beginning. The Chief will move slowly on this new approach to information sharing watching the affect on operations and getting some public feedback.
The balance between the public's curiosity and need to know verses law enforcement's need to be effective and safe is a difficult struggle for any Police Chief. That is especially true for Chuck Harmon. He cares deeply for his City and his officers and does not want to do anything that will harm either.
If you have a Twitter account, just add @stpetepd to those you are following. If you don't have a Twitter account click on the link and set one up. Set up is quick and easy once you have an account add @stpetepd to those you are following.
Next time there is some activity in your neighborhood just check the Twitter account.
Be a little patient with the PD as they move into this. If you have some comments send me an e-mail and I'll get it to the right person at the PD
e-mail Doc at: dr.webb@verizon.net, or send me a Facebook Friend request.